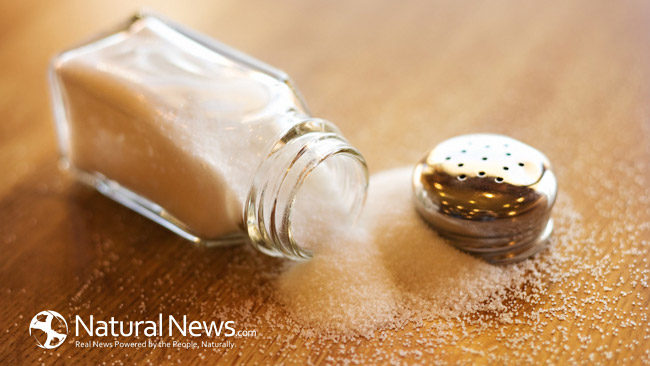 Traditional table salt is composed of two minerals: sodium and chloride. Sodium has a bad connotation, one that equates to wreaking havoc on health. However, the body does need some sodium in order for the nerves and muscles to properly function. Sodium helps send electrical signals among the body’s cells. The body also needs sodium to maintain fluid balance. The problem is that most people in the U.S. consume more sodium than their body needs. The kidneys are in charge of how much sodium is in the body. If sodium intake exceeds what the kidneys are able to get rid of, then accumulation starts to happen. This build ups leads to high blood pressure. The Dietary Guidelines recommend that adults eat no more than 2.3 grams of sodium per day which is approximately 1 teaspoon. The American Heart Association recommends no more than 1,500 mg per day. The body does lose sodium every day through sweat and when going to the bathroom.

Americans have become victims of high salt diets. Most sodium comes from pre-packaged, processed foods. Even without additional table salt, these foods exceed daily recommendations. Having too little or having too much sodium can cause problems. Symptoms of either condition include tiredness, muscle cramps, headaches, swelling, nausea, and shortness of breath. Certain conditions can cause sodium levels to become unbalanced. Certain medications like diuretics can lower the amount of fluid in the body. Diabetes or kidney problems can also cause imbalances. IV fluids or serious illnesses can also lead to imbalances.

Most people are aware of high salt containing foods like French fries or movie popcorn. Other foods have hidden salt in them liked canned vegetables and bread. A hot dog can have up to 700 mg of sodium. One cup of certain cereals like corn flakes can have up to 200 mg. Tomato juice can have close to 700 mg per one cup. Ketchup has about 150 mg per one tablespoon. Most people use much more than that per meal. Frozen meals like pizza or meatloaf are extremely high in sodium. One cup of spaghetti sauce has 1,000 mg. The traditional tortilla has about 300 mg. Cheese is also very high in sodium. This is also true for canned tuna.

High blood pressure from excess sodium can lead to many health problems. These include heart disease, hardening of the arteries (atherosclerosis and arteriosclerosis), kidney disease, and stroke. Ditch the table salt and opt for fresh foods. Satisfying taste buds while sacrificing health is never a good predicament. Be sure to read nutrition labels and be aware of daily totals. Moderation is key. Don’t make the kidneys work harder than they are meant to.