Returning for Treatment Until You Die 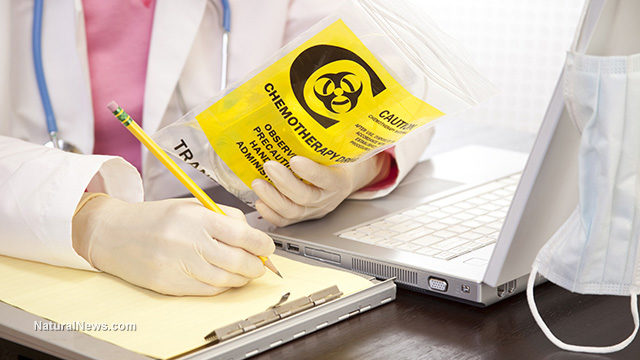 As far back as 1975, Nobel Laureate James Watson of DNA fame was quoted in the New York Times saying that the American public had been “sold a nasty bill of goods about cancer.”  Facts are: The body can be harmed by certain cancer treatments.

And yet I hear on several occasions …’my client has cancer and really doesn’t want to change his or her diet, she is doing conventional treatment, wants to continue eating candy and junk and {fighting for her life} doesn’t want to hear about alternative treatments because they are so expensive and her insurance won’t cover it.’  What’s even more disturbing is- we give big kudos to the women in the walk for the BIG cancer Corporations because they are “fighting the WAR” and they have so far survived the ‘so called battle’, while being sponsored by the very toxic foods corporations that may cause their cancer! It’s time to shine the light on corruption.

“What we mostly see is poisoning the system is the objective of conventional treatments, and the resulting pain and illness often is a torment worse than the disease itself. The toxins catch the blood cells in the act of dividing and cause blood poisoning.” Dr Moss.

Fact: “Chemotherapy doesn’t cure cancer or extend life, and does not improve the quality of the life either. Doctors frequently make this claim though. There are thousands of studies that were reviewed by Dr.Ralph Moss as part of the research for his book, ‘Questioning Chemotherapy’ and there is not one single good study documenting this claim.”

According to Allen Levin, MD UCSF The Healing of Cancer: “Most cancer patients in this country die of chemotherapy. Chemotherapy does not eliminate breast, colon, or lung cancers. This fact has been documented for over a decade, yet doctors still use chemotherapy for these tumors,”

In his book The Wayward Cell, Cancer, Dr. Victor Richards made it clear that, “chemotherapy is used primarily just to keep the patient returning for treatment and to build his morale while he dies”. But there’s more! He said: “Nevertheless, chemotherapy serves an extremely valuable role in keeping patients oriented toward proper medical therapy, and prevents the feeling of being abandoned by the physician in patients with late and hopeless cancers.”

So the question remains: “In what reality do we live in when we cut, poison and burn loved ones with cancer”? (1)

Over the years we (collective) have not made strives in the prevention of cancer because  the battle and war against cancer can be directly related to politics and what corporations and bankers back with their dollar.(2) Fact: Cancer is profitable for Big Oil Companies and Bankers.

Standard Oil was of the foundation upon which all of the Rockefeller industries have been built. One being the AMA and Sloan Kettering Cancer Hospital. The keystone of this mammoth industrial empire was the Chase National Bank, now renamed the Chase Manhattan Bank.
The Rockefeller’s own the largest drug manufactures in the world, and use all of their other interests to bring pressure to increase the sale of drugs. The fact that most of the 12,000 separate drug items on the market are harmful is of no concern to the Drug Trust…(3)

Some drug ads are powered by JAMA,(4) with its biggest single advertiser in the 1940s- Phillip Morris. (Camel cigarettes had the largest booth at the AMA’s 1948 convention, boasting in its ads that “More doctors smoke Camels than any other cigarette.”)(5)

Sometimes as a coach, I feel we’re up against such an enormous wall.  I hear we are suppose to thank our walls and learn from our walls, however in reality I want to see ‘cancer walls’ broken and crumble.  In the back of my mind -I’m asking,  ‘are we going to have these wall for another 100 years?’ Are we not ready to face the truth?(6)

The truth is: The industry wants to see cancer patients die.

So the next question is: ‘why don’t people trust themselves to make a more positive decision in their health?  If they really wanted to live, why wouldn’t they want to make changes that would be within their reach and under their control?  WHY?  And the only reason I hear is, “FEAR”.

Denying self-love- Does fear surround your ability to love yourself right now for who you are? What organ, muscle, or tissue do you feel this fear? Identify. Stop to listen.

Time- How many times a day do you tell yourself you don’t have time for this or that? Time is not your enemy, beliefs based in fear are.  Journal what beliefs are false for you. Categorize them. What do you need to hold onto and what beliefs can you let go?

A Poor Diet- Leaves the mind and body with plenty of toxic side-effects. These play a role in uncontrollable fear-based emotions. After months or years of disrespecting your body with an abundance of alcohol and high sugary products, it’s next to impossible to feel well. Sugar controls the mind and body and leads to increasing fears, depression and poor immunity. Take the path to increasing whole foods and ditching foods that keep you in a state of fear and sickness.

Fear is not only an emotion, it’s a way of being. When beliefs are challenged, fear and denial set in.  We become very uncomfortable and our minds are filled with anxiety. It comes from being confused and feeling helpless and this confusion doesn’t allow one to take control or face the truth. We need the truth in order to heal. One truth being.. the body has the inept ability to heal itself.

How can you get help? In my book, there are three issues I talk about often to clients and they include: digestion, hormonal and mitochondria health. These are involved with all bodily functions. When we get these to work optimally the body works at the cellular level to give energy and all elimination systems work properly to remove toxic waste. The result is our body’s natural defense system, inflammation, is relieved.

What disrupts these famous 3?

The answer is: low frequency foods. These include but are not limited to: mac & cheese, frozen waffles, cereals, fried foods, donuts, breads, rBGH dairy and cheese, sodas and conventional produce.

Mitochondria turn the foods we eat (ATP) and the air we breathe into energy. Solutions include: build a homestyle that you can breathe in and discover foods that are your friend- foods that will love you back.

We pay more attention to genetics, than our own body. We spend a lifetime disrupting digestion, hormonal and mitochondria health and wonder why we struggle with metabolic syndrome, low energy, lost libido, cancer and age related miscommunication disorders such as Alzheimers. All these can be prevented.

Holistic Health is a natural expression of harmony of life. It consist of balance in all arenas.  Certified Health Coaches charge less than 1% of what conventional treatments will cost you. Want to know more? Let’s connect.