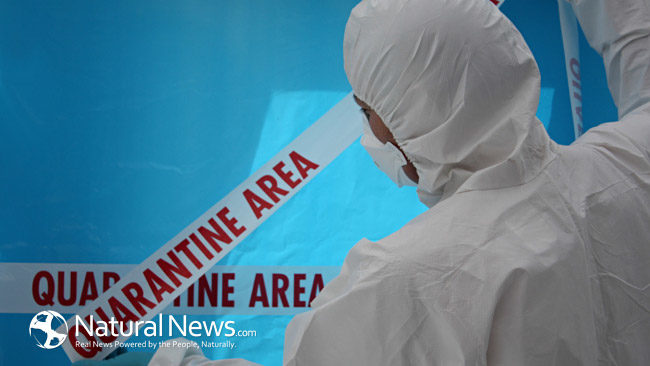 On September 30, 2014 the first US ebola case was confirmed. The same day, Goldenstate Fire/EMS stated on twitter that Dallas Area Rapid Transit (DART) was informed months prior to the first confirmed Ebola case in the United States.[3]

You can review the original tweets here with a link to the screenshots.

Reports have since cleaned up the mess before it leaked into mass media. [6]

October 16th 2014 A passenger vomited and died on the plan from Nigeria to JFK.”He was vomiting in his seat and died sometime before the plane landed around 6 a.m., the source said.”[2]

On that same day a woman, who had recently traveled to Africa, boarded a bus full of people, walked to the back of the bus, vomited, exited the bus, vomited and fell to the ground. The bus took off, headed towards a ceremony and was then called back. Passengers were quarantined for hours. Eight hours after the event, it was determined that the woman did not have Ebola and no test was warranted.

But that’s not the strange part. The bus was “carrying several Marines, their spouses and invited civilian Defense Department workers.” This happened right outside the boarders of security-in the Pentagon parking lot.  [1]

By Halloween, suspected cases were getting a little too close to home for everyone. Panic rose in the mass consciousness and I walked around Halloween night considering that it would be the last time corporations would have to turn our children into drug addicts.

It was four weeks until the biggest travel and shopping days of the year.

If you search often enough for the current ebola news, things pop up. The projection map has become more and more hidden, as if we’d forget that projections for next Halloween were 6 BILLION.

There are only 7 billion people in the world.

With media censorship growing everyday, the world knows only what the people running this world would like us to know. What we do know is that the current ebola outbreak is far from over.

December 22, 2014 the CDC released the documents to address Ebola Infection Concerns in US schools, here.

On January 6, 2015 the CDC issued a travel warning to avoid traveling to Sierra Leone, Guniea, and Libera.

February 28, 2015 the Vice-President of Sierra Leone put himself into quarantine after one of his bodyguards died from ebola. [4]

The March 11, 2015 WHO Ebola Situation Report confirmed 9976 deaths since the outbreak started.

A day after this report was released, Sierra Leone started seeing a spike in cases. [5]

The fight is not over. People are still fighting for their lives as the rest of us sip coffee in cafes and go about our daily routines. The media has flushed our worries away and the fear of pandemic has eased from our minds, yet the fire is still burning.

Just because it has been swept underneath the rug, does not mean that a spark will not blow our way. Keeping an eye on the fire and tracking the smoke approaching in the distance is always better than turning away from it, pretending that is doesn’t exist.

Face the idea that one day it will be staring us all in the face, it is just a matter of time. Do your research now, because tomorrow may be too late.

Appreciate the calm and remember that 10,000 is more than just a number.