Reduce Breast Cancer Risk with Tomatoes and other Key Foods 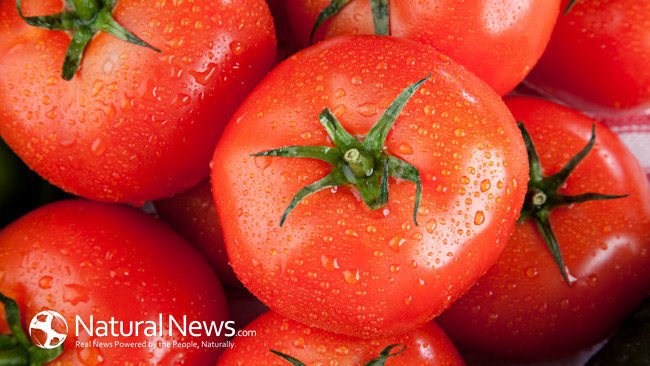 Tomatoes’ health benefits are plentiful, ranging from helping to increase bone density to offering heart protection. Their nutritional makeup has always been touted, but the latest news shows a link between eating tomatoes and a reduced risk of breast cancer in women. Typically, tomatoes’ anti-cancer properties have been associated with a lowered risk of cancers like lung, or that of prostate cancer in men, but not much attention has centered on its role in women’s breast health.

A study published in the Journal of Clinical Endocrinology & Metabolism showed that women who ate tomatoes and tomato products for 10 weeks had higher levels of adiponectin, a metabolism-regulating hormone which plays a role in sugar and fat regulation. Since obesity is one of many known breast cancer risk factors, the study’s conclusion was that consuming more tomatoes may help with weight control. Therefore the link between lowered breast cancer risk for overweight (considered already at risk) women, was made.

Seventy postmenopausal women with a body mass index (BMI) between 25 and 42 (considered overweight) were involved in this study. Their adiponectin levels increased by 9%, showing that consumption of the fruit may play a role in helping women at risk for breast cancer.

It’s believed that lycopene, the carotenoid in tomatoes responsible for its deep red coloring, is largely responsible for the increase in women’s adiponectin levels. According to the American Cancer Society, lycopene may also “help protect against cancer of the cervix, breast, mouth, pancreas, esophagus, and colon and rectum.”

“The advantages of eating plenty of tomatoes and tomato-based products, even for a short period, were clearly evident in our findings,” says study researcher Adana Llanos, Ph.D., MPH, who is also an assistant professor of epidemiology at Rutgers University. “Eating fruits and vegetables, which are rich in essential nutrients, vitamins, minerals and phytochemicals such as lycopene, conveys significant benefits.”

According to renowned health expert, Dr. Oz, other foods that may improve breast health include:

Packed with good-for-you Omega 3 fatty acids which are known to reduce inflammation that causes cancer cells to grow.

Shown to possibly slow the growth of breast cancer cells.

The sprouts of this cruciferous vegetable contain sulforaphane, which studies show can hone in on cancer cells and kill them.

Lentils are rich in folate, which has been shown to produce a 44% lower breast cancer risk compared to women with low levels. Lentils in particular have high folate levels. Asparagus and edamame are also folate-rich.