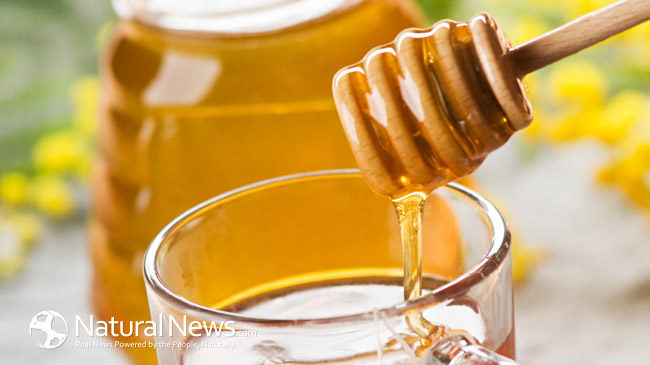 Multinational agricultural corporations are intent on processing, enriching, heat treating, ultra-pasteurizing, flash freezing, irradiating or genetically modifying everything we eat today. But more and more consumers are rejecting these developments, opting instead for natural foods, which have the types of healing effects that turn scientists in white lab coats green with envy. One of these is locally raised, raw honey.

Most people believe honey comes from pollen. In actuality, it comes from nectar from flowers that honeybees collect and take back to the hive. Basically, bees process the honey by repeatedly ingesting and regurgitating it until it is in a concentrated form. The bees then fan their wings over the concentrated, semi-digested nectar until most of the water is evaporated out of it. It is only then that it is considered raw honey, which can be extracted and stored for a long time by beekeepers.

Honey is not sugar. It is a critical food supply for bee colonies that contains complex carbohydrates, which take longer to break down in a body than simple sugar extracted from sugar cane or beets. It also has concentrated levels of vitamins and minerals like B2, B6, manganese and iron.

Honey is great for soothing sore throats, coughs and laryngitis, especially in the springtime when people suffer most from allergies related to pollen.

A little raw honey in mint tea or mixed with cinnamon can ease a stomach ache as well as any overthe-counter remedy.

Because raw honey contains small amounts of propolis—a complex mixture of resins and other substances that honeybees use to seal the hive and fight off bacteria and other micro-organisms—it also makes for an effective topical treatment to ward off bacteria, fungus and viruses.

In addition, honey is less than 18 percent water, which makes it “hydrophilic,” meaning it draws water toward it. This is another reason it is effective as a beauty treatment or as a wound dressing.

In Australia, doctors have been experimenting with honey extracted from hives that draw nectar from tea tree forests. Oil extracted from tea trees is well-known for fighting everything from bacteria to viruses to dandruff to bad breath. When applied topically, tea-tree honey has shown great promise in treating patients suffering from extreme burns.

The key to all of this is to make sure you are purchasing raw honey, not the variety that has been pasteurized or adulterated by multinational corporations bent on profits over quality food. Chinese honey is increasingly being found on the shelves of mass chain grocery stores around the United States. Also, a rash of cheap, honey-like syrups, labeled as “honey sauce,” has been showing up in stores and restaurants.

These are nothing more than high-fructose corn syrup, which has been boiled down to make a thick syrup. Of course, you have to read the fine print to realize this.

Raw honey can be found at local health food stores or at local apiaries. Contact your local beekeeping society to find a local beekeeper near you.

IMPORTANT NOTE: One thing to know for families: Raw honey can contain a small amount of botulinum spores. This is harmless to adults in small amounts, but it can be dangerous for infants, who have not developed all of their intestinal fauna yet.  While this claim has been disputed by some health authorities, the general recommendation is to wait until children are at least a year old before giving them honey—raw or pasteurized.