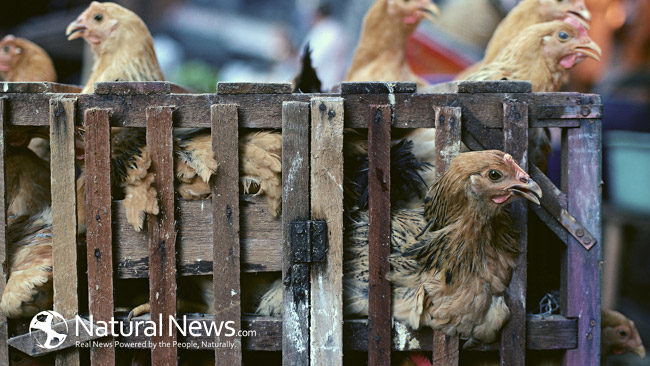 Instead of United States Department of Agriculture (USDA) inspectors inspecting poultry, federal regulators are allowing poultry plant employees to inspect their own poultry to decide whether the food products are safe to eat or contaminated.

Some consider it a “conflict of interest” to have poultry plant employees inspect their own food product.

In addition, a number of inspectors and critics claim the current shortage of federal inspectors in slaughterhouses is so widespread, supermarket meat or poultry stamped with “USDA inspected” may not have been inspected in any way; the federal stamp may not be true.

However, that is just the beginning.

Poultry Inspection by USDA and How the System is Breaking Down

In 1905, Upton Sinclair’s, “The Jungle” was first published in the Appeal to Reason newsletter in Gerard, Kansas, stimulating American consumer outrage and prompting over a century of federal inspectors watching over American meat plants.

However, some Congressional members, food and safety advocates, and federal safety inspectors argue that the USDA’s public health regulating agency, the Food Safety and Inspection Service (FSIS) is breaking down.

They also contend that the health of millions of people who eat poultry and meat products could be in jeopardy.

In addition, the poultry companies taking over their own poultry inspection for contaminants and bacteria that carry diseases like Salmonella and Campylobacter, often found in raw meat, (particularly chicken), are being labeled as “the fox is guarding the hen-house.”

It is a known fact that bacteria found in poultry and meat causes food poisoning due to undercooked and the handling of raw meat or poultry.

A thirty-year and current food safety inspector, Stan Painter said the FSIS used the phrase and considers an inspection to be as follows, “Come in the front door; wave at them as you go through the plant; and go out the back door.”

Another former FSIS inspector purports that her subordinate told her to overlook issues like abscesses in cuts of meat.

According to food safety advocate, Tony Corbo, he and his colleagues turned up internal documents showing that over the past few months there are a rash of plants that have not been covered or received proper meat or poultry inspection.

He also expressed in the last fifteen years of his experience working on meat and poultry issues, “I think this is the worst I have seen it.”

The new ‘chicken rule’ is responsible for a hiring freeze at the Food Safety and Inspection Service. Additionally, the organization implemented mandatory overtime, where many inspectors are working an 80-hour workweek.

Today, there are close to 7,000 federal inspectors in plants that process thousands of carcasses every day. However, presently, there is a shortage of inspectors.

The new, 400-page inspector rule covering the poultry inspection process will result in even fewer inspectors, starting in October. It is the biggest reorganization in meat inspection in the last 50 years, according to Mick McGraw, of the Hale Center of Journalism at KEPT. The cutback of federal inspectors is expected to be about 630 fewer inspectors across the nation, with poultry plant employees replacing the former inspectors.

Changes Made by FSIS

Over a three-year period, the U.S. government expects to save $90 million with the new ruling and regulation.

A spokesperson for FSIS said, “The Food Safety and Inspection Service is modernizing all aspects of our operations to better prevent foodborne illness by focusing on preventing rather than reacting to contamination and other food safety hazards.”

The USDA said the new and revised poultry inspection system would actually reduce the amount of contaminated chicken, “a critical step forward in making chicken and turkey products safer for Americans to eat.”

The remaining food inspectors will focus on a poultry inspection consisting of microbiological testing and sampling, according to Tony Corbo.

However, Mr. Corbo explains the problem with that is “the pathogens of contaminated poultry are Salmonella and Campylobacter and the USDA does not have the legal authority at this present time to prevent poultry products that are contaminated with these pathogens from going into the food supply. They can’t even recall those products.”

In addition, until the USDA declares Salmonella a common pathogen in chicken and an adulterant under the Federal Meat Inspection Act, the testing will not help much.

On the other hand, if the USDA moved to make this law, they could prohibit the sale of contaminated chicken and give the poultry industry incentive to control it.

What Is Really Happening to Chicken

Even if an American consumer goes to a market to buy meat or poultry, and the USDA meat or poultry inspection stamp is on it, the food product may not have actually been inspected.

Another 30-year USDA poultry inspector from Missouri, Dayna Coonce exclaims that she is so concerned about meat and poultry inspection, as well as the new rule, “I’m telling my friends to quit eating chicken after it goes into effect.”

According to U.S. Rep. Delauro and Rep. Louise Slaughter, the only microbiologist in Congress, having fewer federal inspectors in poultry slaughter facilities, “is a recipe for more foodborne illness and more people in the hospital.”

Last July, Delauro requested that the USDA shut down all Foster Farms poultry processing plants until an outbreak of Salmonella that sickened 600 people in 29 states ended.

Additional concerns developed due to a recent scandal involving chicken from China.

The USDA’s meat and poultry inspection division re-certified the People’s Republic of China’s food safety inspection program in August 2014, claiming it is “equivalent” to the one in the United States.

However, this summer, an undercover investigation by Chinese journalists found that a Chinese-inspected plant, owned by the American company Shanghai Husi Food Co. Ltd., forged production dates and sold long-expired chicken and beef to Kentucky Fried Chicken (KFC), McDonald’s, and other restaurants overseas.

Director of food safety for the Center for Science in the Public Interest, a nonprofit food safety organization, Caroline Smith DeWaal, said the law hasn’t changed since Upton Sinclair’s “The Jungle”, and the law still requires that every animal carcass be checked by an inspector.

Earlier this year, DeWaal’s organization sued the USDA to try to force the agency to acknowledge that antibiotic-resistant strains of Salmonella in poultry and meat should be declared adulterants, banning them from sale to the public.

In fact, in the 1990s, after hundreds of people became sick from consuming fast-food hamburgers and four children died, the agency declared a deadly form of E. coli bacteria an adulterant.

However, more than three years after her organization initially petitioned the USDA to declare antibiotic-resistant Salmonella as an adulterant, USDA officials responded to DeWaal’s request at the end of July, claiming there isn’t enough proof that those strains of the bacteria are indeed adulterants.

Critics express their concern that meat and poultry inspection is expected to get worse.

Conversely, when federal inspector, Stan Painter spoke with the Secretary of Agriculture, Tom Vilsack, the USDA leader said, “We think 5,000 fewer people will not get sick.”

Testing and Illnesses Caused by Bacteria

One in six Americans contracts a foodborne illness, each year. Close to 128,000 people are hospitalized and 3,000 die.

The Food and Drug Administration (FDA) tests in 2011 revealed more than 70 percent of chicken breasts in California markets tested positive for Campylobacter.

Today, routine poultry inspection, testing and standards for poultry parts, like chicken legs, breasts, wings and thighs do not exist.

In addition, in spite of the fact that there are scores of opportunities for contamination during processing, pathogens are only measured before processing begins. This means poultry inspection will not take place and products contaminated by the end of processing are likely to go undetected.

At present, the USDA inspects millions of pounds of poultry and meat products every day. Nonetheless, the Centers for Disease Control and Prevention (CDC) concluded that no progress has been made in reducing Salmonella and Campylobacter illnesses since the agency first conducted a baseline study of foodborne illness rates from 2006 to 2008.

In the end, the likelihood of unwholesome and unsafe poultry and meat going in the food supply may be a reality.  A final word of caution.  Consumers may be facing a greater health risk due to the new poultry inspection ruling. Time will tell.