Potatoes: Are they good for your health? 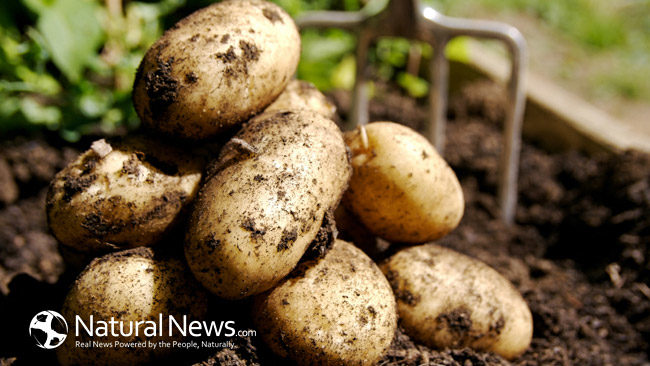 A potato contains minerals like zinc, magnesium, potassium, phosphorus and calcium. Furthermore, it offers vitamin of the B-complex. A portion of 300 grams potatoes ensures that you´ll get enough of the RDA of vitamin C.

For most people potatoes can be very healthy. It is not a good advise though to eat them daily. Also eating fried potatoes is not a good idea. Most supermarket oils promote low-grade inflammation. You may want to stir fry cooked potato in coconut oil or real butter, which have medicinal benefits.

Fried pesticides are not healthy

Potato is not just healthy. Most potatoes have been cultivated by using pesticides. After it had been raining, the pesticides fall into the ground and are being absorbed by the roots of the potato plant. Pesticide components harm your body. Therefore, it is advised to eat organic potatoes only.

There is one other kind of disease promoting uses of potato: frying. That is when you eat potato in combination with nutrient deficient transfats. Potato chips and French fries or not healthy at all, on the contrary. When you eat too many trans fats you enlarge the risk for western food-based diseases as obesity, diabetes, cancer and cardiovascular diseases.

Lack of medicinal use

Boiled or steamed, organic potatoes are healthy because they provide us with nutrients. Though, there are hardly any medicinal uses known. This is in contrast with a product like sweet potato, which is much more healthy than potato and has medicinal benefits. One use of nature therapists is to apply raw potato juice on the skin for patients with arthritis. Another is is to drink a spoonful of raw potato juice against reflux. There are better and safer ways to treat reflux. For instance, you can drink licorice tea for immediate alleviation and eat green more vegetables to cure in a few weeks. Never take raw juice from this nightshade on your own; do this only when a medical doctor advises you to. The medicinal property of raw potato juice is hardly being used, because it has too many side effects.

Scientists published a study in 2016 in which is concluded that eating potato in great quantities before pregnancy gives an enlarged risk for developing gestational diabetes. It is good to know that diabetes is not only caused by refined sugar but also by trans fats. Consuming potatoes means in most cases: consuming large quantities of disease promoting trans fats, in combination with the high amount of carbs (sugars) in potato.

They make you a junky

Trans fats give us diseases. The potato is used as a vehicle to spread it worldwide. That is why you should never buy fried potatoes in a snack food store anywhere in the world. Of course, this is easy to say. Many people are addicted to junk food; it is designed as an addictive food. You don´t fool anyone that eating French fries daily is delicious; it is just an addiction and you legitimate it by saying it taste nice. You can fry any kind of tuber at home, safely, using coconut oil.

One more reason that potato is not just healthy is because it´s a member of the nightshade family, like tomato, bell pepper, hot pepper, eggplant, and goji berry. Potato contains solanine. This component is, under healthy conditions, not being absorbed by the body. Though people with  auto-immune  diseases have intestines that function less well. Latest research shows that all people with auto-immune diseases have a mucous membrane in their intestines that functions less well through to all kind of inflammations. The mucous membrane is a filter for toxic elements from foods. But when this filter is malfunctioning, as is the case with all people with auto-immune disease, than inflammation-promoting components may enter the body and potentially cause a disease.

One research of China shows that eating potato might prevent from gastric cancer. Mainstream newspapers like the Daily Telegraph and Independent immediately shouted that eating potatoes prevent people from gastric cancer. The study itself though does not talk about potatoes but about ´all kinds of vegetables´ and they say that light colored vegetables seem to lower cancer risk. Journalists much have been thinking that potatoes are white enough to prevent cancer, but this is a completely wrong interpretation. Many studies show that when you have the habit of eating vegetables a lot, you lower the risk to get cancer. Well known anti-cancer vegetables are purslane, shiitake, common mushroom, broccoli, watercress, Chinese cabbage,  and many kinds of cabbages. Potato won´t ever be in the list of anti-cancer vegetables due to its lack of antioxidants.

More bad news from scientific research was published in 2016. Eating potatoes in any form, boiled, steamed or fried, increases the risk for hypertension. 170.000 people participate in this study. In order to draw conclusions from this kind of studies, we have to wait till the first researchers start to make a difference between organic potatoes and pesticides-loaden potatoes. The medicinal effects of organic food and commercial food may be completely different. The first studies show that organic food contains more nutrients. That is why it is safe to say that organic food is more healthy.

For an estimated 85% of the people, it is safe to eat this staple vegetable. People benefit from consuming potatoes because it supplies the body with a great number of vitamins, minerals, fibers and flavonoids. Though this food is not so healthy as the staple food in Europe which it replaced 350 years ago: root celery. It is not wise to serve potatoes daily at the dinner table. I advise to eat more sweet potatoes, root celery, cassava as a substitute for potatoes. Too many people in the western world eat potato daily. Organic potato is a great food source, but not so great that it should be eaten daily.