Our Planet and Solar System is Shifting 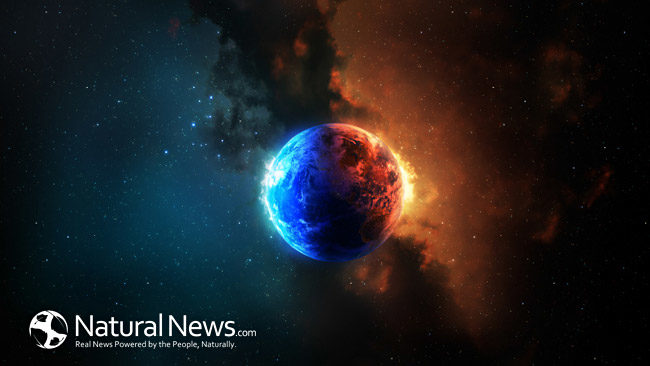 It’s no secret that the entire solar system is undergoing a shift and it seems that an agenda has been set in order to blame human beings for changes seen on Earth. However, the universe has told the truth.

It has become abundantly obvious that a change is occurring. A change that is becoming consistent throughout the entire solar system yet is being blamed on human beings alone. This change, whether you want to call it global warming or weather modification, is a part of a natural cycle and nothing more. This cycle can be traced throughout human history through ancient stories of the rise and fall of continents such as Lemuria and Atlantis.

Regardless of the natural phenomena, an agenda has been set that blames human CO2 emissions for both hot and cold weather records made in the past few years. These records include increased hurricanes, seismic activity, tsunamis, floods, snowstorms, droughts, and even volcanic eruptions. However, regardless of the fact that CO2 emissions do not help pollution levels the wandering of the North Magnetic Pole can hardly be blamed on humans alone. The weakening of the Magnetosphere too has been shown to have been waning for the past 400 years, much longer than the previous 100 years of vehicle usage and pollution. Let’s go to the facts.

Our Star: The Sun
During the Sun’s 11 year solar cycles it can be expected that the Sun will be fairly quiet during a Solar Minimum in regards to Sun Spot Activity and Solar Flaring. However, during the Sun’s most recent Solar Minimum it was observed that this was the longest Solar Minimum the Sun had undergone since its last major cooling. Even now as the Sun is observed during Solar Maximum C-Class and X-Class Flares are infrequent and considered to be moderate at best during times of increased amounts of bi-polarity mixing.

Inner Planets
Moving onto the inner planets, in 2012 large explosions were observed slightly above the surface of Venus. Shortly thereafter it was realized that the rotation of Venus had slowed down and that the planet had become brighter. Mars has experienced a significant amount of seismic activity, Mars-quakes, as has the moon orbiting Earth as well.

Outer Planets
Like Venus, Jupiter too has become much brighter especially after an odd explosion was witnessed in 2012. The explosion, experts concluded, most likely came from an impact of either a comet or an asteroid. If this isn’t odd enough Jupiter’s Red Spot is dying as Red Jr. is showing signs of becoming more dominant. Odder still, Jupiter is missing an entire stripe which is one of Jupiter’s greatest characteristics. Saturn’s rotation has slowed down similar to Venus and the moons orbiting Saturn has shown the same cloud anomalies as the noctilucent clouds seen on Earth. Auroras were also seen on Uranus for the first time.

Earth
In March of 2012 the United States alone was responsible for more than 15,000 warm weather records according to the National Oceanic and Atmospheric Administration (NOAA). Southeast Asia has had a rise in hurricanes, floods, and tsunamis, India has experienced drought records, and the Pacific Rim of Fire has experienced an increased amount of volcanic and seismic activity. In September of 2013 an island appeared out of the Arabian Sea after a 7.7 Magnitude Earthquake struck the coast of Pakistan. Odd sounds have been reported all over the globe as well as a sudden uptick in fireball sightings has been reported in the United States, Canada, and in Russia.

We exist in an electromagnetic universe interacting not only with the Sun but the planets and passing celestial bodies. Humans cannot be responsible for the climate change being witnessed on Earth. An alternative hypothesis to climate change is that energy from space has an effect and plays a major role regarding terrestrial weather. Modern-day earthquake prediction models are beginning to use Coronal Holes observed on the Sun as part of their analysis for determining strength and stability regarding seismic activity on Earth. As well as the Standard Comet Theory, also known as “Dirty-Snowball” Comet Theory is being compared to the Electric Comet Theory to better understand reactions from the Sun after a comet reaches perihelion or becomes a Sun Diver.

The facts presented prove one thing. That the entire solar system is undergoing a simultaneous shift. Case in point; humans cannot be responsible for changes occurring on the inner and outer planets nor can CO2 emissions be responsible for the weakening of the Magnetosphere over the past 400 years. It seems that the weather phenomena witnessed on Earth as well as the weather records being made are a part of a cycle. A cycle that humans have survived many times before.

“The Case of Jupiter’s Missing Stripe.” By Thomas Myers
http://www.examiner.com/article/the-case-of-jupiter-s-missing-stripe

“Our World is Changing: Looking Beyond ‘the 2012.’ Suspicious Observers – Ben Davidson
http://www.youtube.com/watch?v=woVitezc-zU&feature=youtu.be