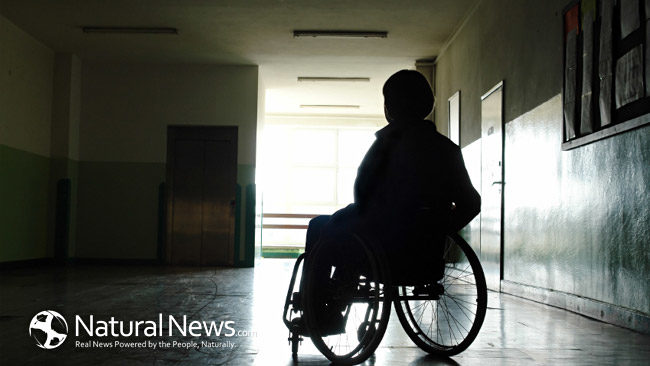 Last week I wrote all about a man named Vasile Dahorea. He was an extraordinary human being, as those who read my account would no doubt concur.

This week I present another true life account, no less spectacular than Vasile’s, but the heroine concerned is still in youth, and clear of her terrible condition, whereas Vasile suffered on with his till his 82nd year.

Eighteen years ago in a southern Spanish town named San Pablo there lived a 7-year old girl named Melissa, with her mother and three other siblings. The children led a very healthy lifestyle, due to a loving mother who cared very strongly about their diet and environment. Nonetheless, in her seventh year of life Melissa began to show the symptoms of what was eventually diagnosed as Guillain-Barré syndrome. In Melissa’s case a severe version, and soon she became fully paralyzed and bedridden. Truth be known, this condition arrived soon after she received a vaccination, though there’s no proof that it was the cause, the timing was most interesting. Her plight was however to haunt her for three full years.

Fortunately, as I described above, Melissa’s mother was a strong, independent minded thinker, and held little or no confidence in established medicine and Big Pharma, possibly her complete conversion to natural cures was as a result of the strange coincidence between the vaccination and subsequent syndrome. So when her doctor prescribed a series of medications that the mother was to administer at certain times of the day and night, none of them were destined to reach their target. They were never administered because Melissa’s mother threw them all in the trash. Was this perhaps her road to Damascus?

Years later Melissa related one particular incident that will always remain in her memory, as a clear and concise moment in time, unfaded through the passage of seventeen years.

She was paralyzed in bed, she could not even move her head, nor could she speak, yet weakly and with difficulty she could move her eyes. Clearly in view, and shortly after the doctor had departed the room she had in the local hospital, Melissa watched as her mother held a large syringe in her hand, containing what resembled liquid cement, no doubt destined for her nether regions, and her mother was left to administer said item at the instruction of the doctor. Thankfully she gazed on as her mother stared transfixed at the offending syringe for some moments, then turned and tossed the thing into the trash can by the bed. Melissa, though paralyzed, felt a surge of joy inside at her mother’s defiant act. And so went most everything else intended to be squirted into or popped into Melissa’s motionless form.

The doctors at the local hospital discussed Melissa’s condition and since she was the third case in the whole of Andalusia, they all agreed that the best thing to do was send her home to languish in more familiar surroundings. They had tried numerous methods in her mothers absence, all of them to the benefit of Big Pharma, yet none of them benefited Melissa, for none of them worked.

Thus Melissa found herself dispatched back home, motionless in her own familiar surroundings. Her mother continued to trash the doctors wares, and instead chose to put her on a strict fruit and vegetable diet. Lots of fresh greens, and good fresh local mineral water.

Then the icing on her dietary cake was a glass of home-cultured kefir after each meal. Melissa’s mother learned about the wonders of kefir from a close friend who had witnessed her mother’s growing sadness due to Melissa’s sorry state, she recommended kefir and delivered the grains to her house.

This may well have been a major solution, although truth be told, her condition did worsen before it began to get better. For some weeks after returning home her mother discovered that Melissa could no longer swallow the food she administered by the small spoonful, so back to the hospital she went to be placed on drip feed and even an oral tube down into the stomach. Things were not looking good at all.

Nevertheless, undaunted, her mother continued to include kefir in her daily diet. Then one day she returned to normal feeding, and gradually improvement was such that she returned home again and back to the fruit, vegetable and kefir diet.

After two months or so on her mother’s strict regimen she began to have sensations in her fingers and toes, as her extremities began to fire up again, so did pain and discomfort as her muscles and tendons began to function. At the age of 13 her recovery was near complete. She could walk relatively long distances, bend and turn, and could use her hands.

Today she’s 25-years of age and newly married. Each early morn she jogs a circuit from her house down to a nearby river, on round her town, and back home. She works as a beautician in a Bel Air type town called Sotogrande, situated a few short miles east of the Rock of Gibraltar. Recently she earned her stripes and qualified as a naturopath.

If that wasn’t enough, her enthusiasm for life has many personally added facets. She’s learning electric guitar, and has worked as a model for a fashion photographer. Possibly her years of stasis in bed at home helped her to think and act outside of the box, for when she returned to school after her illness, she chose to make friends with the kids everyone avoided. You know the kind … Billy Buckteeth, and Wally the Unwashed. She made friends with those who placed well-chewed gum on the seats of others! At least that’s the kind of friends I imagine she made, for she wasn’t totally clear about that side of her story.

Today she also proves that old habits die hard. She’s a strict vegetarian, that she became while bedridden 17 years before. And refuses all vaccines, and never visits the doctor, furthermore insisting that should she and her new husband have children, they will never receive vaccines either. Her husband has become a new convert to this model after hearing all about the extra ingredients in the shots.

Recently I’ve encountered a growing number of people who share my view, that vaccinations are to me the sword, or needle, of Damocles.

Vaclib.org is always helpful on those matters, not forgetting of course naturalnews.com. Which incidentally covered the news recently about MMR vaccines and their correlation to autism. For most of us this was hardly a revelation. In my case I knew that Dr. Wakefield, an English gastroenterologist, many have called him the world’s top in that profession, had, for more than two decades proven the connection, yet met with hostile opposition from his peers. How many kids could have been saved from this condition had Wakefield’s research been acted upon is unknown to me, but I’m sure it’s a grand number.

Dr. Wakefield discovered the link between the condition of gut flora and how it affects the brain. Through examining autistic children he was shocked to discover that all autism sufferers shared the same problem, which was that their gut flora was in a terrible condition. His explanation to a layman such as myself was simple and logical. A strong flora is the mainstay of good healthy function, and a regular intake of kefir serves this purpose admirably I’ve found.

If anyone should doubt this, then ask an expert. Melissa Sanchez can be your first port of call. But perhaps the second should not be a Big Pharma doctor, for in the case of Melissa’s mother, who on helping to cure her daughter, was asked by the doctor how she managed it, presented him with a jar of kefir grains, only to see him wave his hand in dismissal, stating that this had played no part in it. Way back then his ignorance could be forgiven, though nowadays in our information age, they have no excuse.