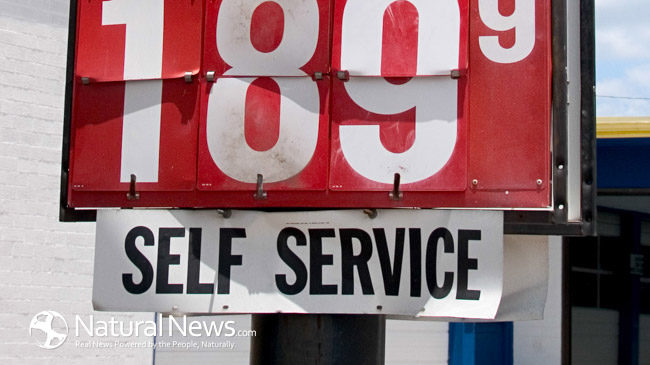 If you drive a car regularly, you can’t help but have noticed the plunging prices at the pump over the last several months.

The average cost for a gallon of gasoline dipped below two dollars recently. According to AAA, that’s the first time that’s happened since March 2009 — more than six and a half years ago. To further put things in perspective, the average price of gas was $2.38 per gallon this time last year.

Unless they own an insane amount of energy stocks, no one will be disappointed at every driver’s recent relief at the pumps. Why are gas prices falling down?

Quite simply, oil production in the United States has exploded thanks to the proliferation of fracking (which may or may not be a good thing, depending on whom you asked). This is troubling for OPEC nations — like Saudi Arabia, Venezuela, Iran, Iraq and Qatar — which for the most part lack diverse economies. They need to dominate the oil market, and they’re willing to do whatever it takes to.

Traditionally, OPEC has operated like a cartel, controlling the supply of oil to keep the prices exactly where it wants them. Now that the U.S. is producing so much oil, however, OPEC has decided to flood the market with oil of its own, thereby driving the price down further and further.

The hope is simple: Price the Americans out of oil production. With gas prices dropping, it eventually becomes senseless for fracking operations to continue, so the OPEC thought process goes.

Beyond the fact that lower gas prices leave you with more money in your wallet after you fill up, we must remember that literally everything you buy — food, beer, clothes and even digital storage — is impacted by the price of gas.

Physical items have to get from Point A to Point B some way. Even in the case of digital items, the data centers that power delivery and accessibility consume tremendous amounts of resources. Logic tells us that the higher the price of gasoline is, the more money we’ll spend on virtually everything.

Small businesses don’t operate on the same scale as enterprises. Larger organizations, despite having to pay more overall for fuel when gas prices are high, aren’t as affected by fluctuations as small businesses are.

Think about it: A small couriering service might have to make a delivery in one town and then drive 30 miles to make the next delivery. On the other hand, a large service like Amazon might have 50 deliveries in the same town. Larger organizations are more efficient with their resources.

But at the other end of the spectrum, small businesses stand to benefit remarkably when gas prices fall down. Though some of them have tacked on fuel surcharges in recent years, many are removing them as they’re able to calculate healthy profits when not paying upwards of four dollars for a gallon of gas.

In other words, lower gas prices help small businesses thrive. As a result, they usually pass those savings onto their customers.

There are winners and losers in any economy. Unfortunately, as energy prices tumble down lower and lower, small energy businesses can expect to have a difficult time staying afloat over the foreseeable future.

Already, we’ve seen Royal Dutch Shell agree to fork over $70 billion to acquire BG Group, a smaller energy firm. Shell has the assets, and due to the tanking energy prices, BG Group didn’t have many other options. Unfortunately, when the dust settled from that deal, Shell announced it was going to lay off thousands of people.

If BG Group can be said to be comparatively small, tons of companies are even smaller. Two such companies are Seadrill, a deep-sea oil drilling company, and Linn Energy, a natural gas company. Both have seen the value of their shares nearly disappear over the last few years.

Unless they happen to be in the energy business themselves, small businesses — and their customers — stand to benefit tremendously from falling gas prices. Let’s hope these low prices are here to stay.