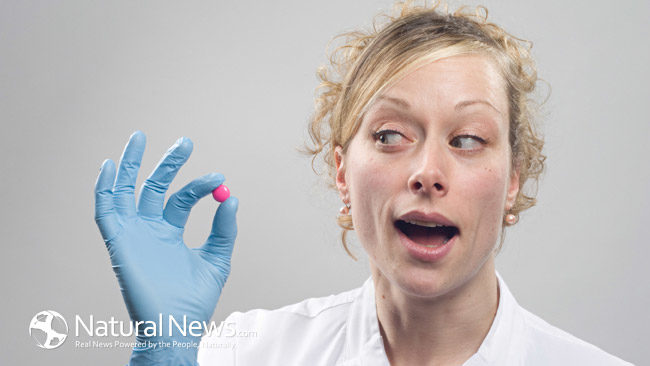 After my last post about vaccinations, I received this comment from someone: “Please read an actual textbook, nothing you’ve said is even remotely close to true.”

One of the basic tenets of my entire healing philosophy—something that I say over and over with everyone who calls me, in my book, and personal interactions is: “Don’t take my word for it, do your own research and find your own truth.”

So let’s talk about the truth of how scientific research— you know– the kind you read about in textbooks—leads to the development and approval of safe new pharmaceutical drugs.

Back in June of this year, the FDA recommended approval of what is being called “the first female libido pill” by a vote of 18-6. The “Pink Pill” treats “premenopausal woman with Hypoactive Sexual Desire Disorder.”

Isn’t it great how they color code all these pills—blue for men, pink for women, purple for heartburn, and so on. And isn’t it interesting that for men it’s an erectile “dysfunction”—while for women—perimenopause is now a “disorder.”

Perimenopause means “around menopause” and refers to the time period during which a woman’s body makes its natural transition toward permanent infertility (menopause).

Women start perimenopause at different ages. You may notice signs of progression toward menopause, such as menstrual irregularity, sometime in your 40s. But some women notice changes as early as their mid-30s. The latest research (found in links below) shows perimenopause can last from 6-13 years.

The approval came after an intense, yearlong campaign by an advocacy group for women called “Even The Score.” Sprout Pharmaceuticals (the maker of Addyi) donated money to “Even the Score” to enable them to recruit patients to attend FDA meetings. They purchased plane tickets and paid for lodging for these women in exchange for them speaking out about how low libido is a significant issue for them and in favor of the approval of Addyi at FDA meetings. In addition, Sprout Pharmaceuticals sponsored Even The Score to lobby Congress and pressure the FDA to approve a drug they formerly rejected—not once, but twice.

I applaud these women for their advocacy and for bringing real patients to the FDA to tell their story! This is becoming a powerful strategy–bring real people who give heartfelt testimony on issues that matter to them.

However–I do not agree with pseudo science that can cause women more harm than good. This pill was not intended for sexual health. Remember the original synthetic hormone replacement therapy for menopause? It took years of women dying of uterine and ovarian cancer before they realized the progesterone connection.  This pink pill was originally tested as an antidepressant but failed to be effective. As is the case with so many drugs—if it doesn’t work for the original intended use—they ask the test subjects what they think the pill did for them. Some of the test subjects reported increased sex drive—suddenly a libido pill was born.

In the  ABC “Nightline” video below, one of the test subjects in the study is featured in an interview with the CEO of Sprout Pharmaceuticals, Cindy Whitehead. This woman clearly represents the “target audience” of the campaign.  Thirty-something, large house, four kids,  husband–the woman claims that after taking the pink pill, she felt something that she never felt before. Suddenly she was compelled to go buy “sexy lingerie.” Queue the infamous “holding hands walking down the sidewalk” happily ever after scene.  Unless you’re holding hands in separate bathtubs (like a male ED commercial).   No where does it address the major issue of stress;  taking better care of your body; exercise; lifestyle changes, or food choice.

So does this really empower women to seek to understand and embrace the changes they are feeling?

Addyi has little to do with libido. It has a completely different method of action than erectile dysfunction drugs like Viagra.  Addyi was originally formulated as an antidepressant. Antidepressants affect the neurotransmitters dopamine, norepinephrine, and serotonin in the brain. Antidepressants have side effects, must be taken every day and take up to two weeks to become effective.
Viagra, on the other hand, is taken at the time of sexual intercourse, directs blood flow to the male genital organs, the effects occur rapidly, and let’s just say—the results are “measurable.”

Some things can’t be measured.

In ancient societies, tribes, and communities–every stage of a woman’s life was celebrated with her “sisters.” Menstruation welcomed you to womanhood (Maiden), child birth welcomed you to Motherhood (Mother), and menstruation welcomed you to “Cronehood.” Ever heard the expression, “my old cronies”? Crones were the “elders,” the grandmas– and were revered for their wisdom, moral law,  and healing knowledge. The younger women of the tribes knew that the elders understood what they were going through and what they were feeling.  Crones understood that unbalanced hormones could make you crazy. They knew what plants, herbs, and treatments would help restore a woman to grace and balance. They celebrated every aspect of being a woman with special ceremonies where stories were shared,  bonds were formed, and woman were empowered. It was a Blessing to be a woman.  It was not a “disorder.”   The original meaning of the word bless is about blood. Men were in awe  that women could bleed like they did and not die. Women were a mystery.

Clueless males–alive and well since the beginning of time.

Hormone issues in pre-menopause make you feel like you’re crazy. Hormones tell your body what to do. They drive every significant function like thyroid, pancreas, metabolism.  That’s why you wake up in the middle of the night because your heart is tacking out. That’s why you suddenly feel deeply depressed for no apparent reason. Tears appear for no reason. Sleep is impossible. Some nights you wake up drenched in sweat.  Your doctor can’t explain all your symptoms. They don’t fit into any kind of disease profile. So they offer you antidepressants or hormone therapy until you get past it. These treatments do not work with your body to bring you back to hormonal balance and wellbeing. These treatments can have side effects.

Anytime you substitute a synthetic pharmaceutical drug for a function of the body, you override the innate God given ability of your body to heal itself. Synthetic agents may fool the body going in, but do not break down like natural substances. Therefore you have side effects as the drugs build up and are not easily assimilated, broken down, and eliminated by your liver. Natural treatments formulated using organic plant based substances work with your body to restore function and bring your body back into balance. Nature has no side effects. I hope the distinction is clear.

I have found a natural product that has been recently formulated by one of my favorite female doctors of all time—Dr. Christiane Northrup. Dr. Northrup has spent her life as a true advocate for woman’s health and has years of professional experience. Her product, “A-ma-ta,” is backed by valid, scientific research and has been successfully used for over 700 years.
(Now we’re talking! Ancient wisdom–tribe tested)  A-ma-ta is “a patented extract of the Pueraria Mirifica root.”  It is also available from other sources and comes in many forms.  From my personal experience, A-ma-ta works—and it does so very quickly with no side effects. I am not a paid spokesperson– I won’t recommend anything that I haven’t personally tried, with noticeable results that make it worth reordering. Crones are like that.

In the Nightline video linked below, the reporter asks CEO Cindy Whitehead what it would mean to her to be the first to market a libido pill for women. The Pink Pill known as “Addyi” received full FDA approval on August 18, 2015. Sprout Pharmaceuticals was purchased on August 20, 2015, by Valeant Pharmaceuticals for $1 billion dollars plus profit sharing. The expected availability of Addyi is October of 2015.

Seek your Tribe. Love your Cronies. Find Your Truth.