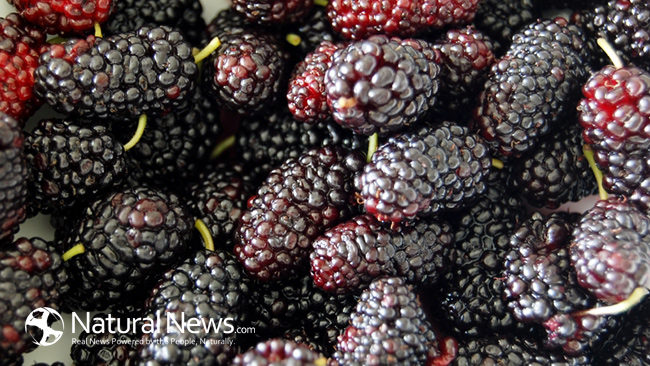 Mulberries are a refreshingly tart, yet sweet berry that comes in a variety of colors. Native to several locations around the world, mulberries can range in color from white to a deep and dark red hue. Mulberries grow on both trees and bushes, with the bushes producing a larger quantity of fruit each season. While mulberries are a delicious addition to pancakes, pies, and can be quite tasty in cobblers, the berry also has some health benefits that can make it a go-to fruit.

Weighing in at just over 40 calories per 100 grams, the mulberry is a good source of anthocyanin, which is a flavonoid that has been shown to have protective properties against cancer, inflammation, and has some anti-aging properties as well (1). Mulberries contain a powerful concentration of an antioxidant known as resveratrol, also found in red wine, which may have some heart health properties (2).

The little berry is also a good source of protein, which is not commonly found in most fruits, with close to 1.5 grams of protein per serving. The medicinal properties of the mulberry can be traced back centuries, appearing in Asian folklore as being effective for a variety of ailments, including insomnia, tapeworm, arthritis, and ringworm (3).

Are mulberries good for diabetics?

The high sugar and carbohydrate counts in fruits can make satisfying a sweet tooth with nature’s candy challenging. However, all fruits are not created equal, with some being better choices than others for diabetics and some, such as the mulberry, have actually been shown to help in controlling blood sugar levels. One study conducted in 2007 revealed that the intake of mulberries had a significant impact on the level of sugar within the blood as well as the peak-to-trough fluctuations that occur, thus helping to stabilize blood sugar levels (4).

Mulberries also possess diuretic, hypoglycemic, and hypotensive properties, which have been studied extensively. One such study revealed that individuals who consumed mulberry extract were able to have better glycemic control when compared to traditional medication (5).

Diabetics are not the only ones who can benefit from mulberries