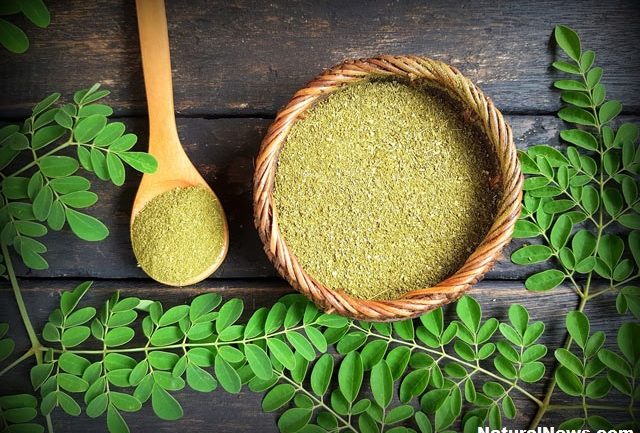 The mighty moringa plant, or as it’s fondly called “miracle tree” is becoming the go-to plant to treat a variety of ailments. Moringa oleifera is originally found in its native country of South Asia, but is becoming abundant throughout the tropics. For centuries its leaves have been used to cure and prevent more than 300 different diseases.

Moringa is sometimes called “drumstick tree,” or “horseradish tree,” and is easily recognized by its sturdy small, round leaves. Each one packed-full of protein, beta carotene, calcium, potassium, vitamin C and so much more. For more than 4,000 years, it has been used to make medicine and as a source of food. In fact, the use of moringa pre-dates the days of Alexander the Great, when he and his troops fought the mighty Ancient Maurian warriors of India. According to Roman historians, these warriors hardly ever got sick and survived on little sleep. After countless battles, Alexander’s armies eventually fell under the siege of the Maurian’s.

This little wonder plant is popular around the globe, especially in impoverished areas such as Thailand, Malawi, Senegal, and India where it’s used as a nutritional supplement. One great thing about moringa is that it grows in almost any weather condition, which allows people to cultivate the plant year-around for it’s nutrients.

Moringa leaves are full of antioxidants, including beta-carotene, vitamin C, quercetin and chlorogenic acid. Chlorogenic acid is known to lower blood sugar levels in animals by slowing the cells’ absorption of sugar.

Moringa seems to have an anti-diabetic effect on the body, because of plant compounds called isothiocyanates found in the leaves. A study showed that women who took moringa leaf powder daily over the period of three months reduced their blood sugar levels by 13.5 percent.

Unfortunately, food supply contamination has caused a spike in arsenic toxicity, which can be found in staple foods such as rice. It’s also made it’s way into our water supply. Moringa leaves and its seeds have shown the ability to protect against the possible side effects of arsenic toxicity, a prevalent problem in populated countries.

Used as a purifier of water

Taking moringa regularly can also have a positive effect on the digestive tract. It is extremely high in fiber, which aids in the cleaning out of intestines and digestive system. Moringa contains isothiocyanates, which has anti-bacterial properties to help rid your body of H. pylori, a bacteria known to cause ulcers and gastric cancer. Another fun fact is that the seeds are now the chosen method for purifying water even over conventional materials.

Here are some common ways to implement moringa into a well-balanced diet:

The powder can also be added as a supplement to soups, casseroles, smoothies, and other foods for extra nutrition. Remember that moringa has a distinctive flavor, so it’s best to use it sparingly when first trying it. A little goes a long way! Moringa oil is also utilized for skin care products such as soaps, face oils, or cold-pressed it for cooking.

Health, Fitness and Beauty Writer at MB Media
Melissa is a news reporter who has more than 16 years of experience reporting on news, beauty and entertainment. She writes articles in the health, beauty and fitness sector. She also blogs on life issues women over 40 face.