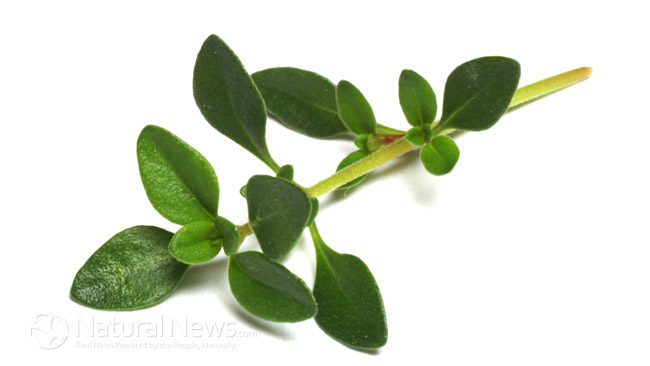 Thyme is an ordinary plant with an extraordinary background, extending back to the beginnings of recorded history. A familiar culinary and ornamental herb from the mint family, its pleasantly lemony fragrance is a frequent flavoring in poultry and vegetable dishes. It’s a versatile ingredient, utilized in creative ways. its honey is produced on Mount Hymettus in Greece, and it’s an ingredient in liqueurs created by Benedictine monks.

More than 220 species of thyme are cultivated. Most are low-growing evergreen shrubs that enjoy sunny and dry conditions. Thyme is native to southern Europe, but has become naturalized in many other areas.

The origins of the name “thyme” are a curiosity for language scholars. It may derive from either the Latin word for “smoke,” fumos, or the Greek word for “courage,” thumas.

Frequently burned in the ancient world in connection with the dead, the ancient Greeks burned it in funeral rites with the intention that it would ease a soul’s passage into the afterlife.

They also burned it at altars to the gods and thought that the souls of the dead would live on in thyme flowers. The herb was also burned to drive away illness. In earlier times, the Etruscans and Egyptians used it to embalm their dead.

The ancient Greeks also believed that it could inspire courage. Soldiers bathed in thyme-infused water before going off to war. By the Middle Ages, ladies of the court of England would embroider the herb on scarves to send with errant knights on their quests.

Medicinal Thyme Through the Ages

Thyme has been used medicinally throughout recorded history. The ancient Greeks used it to treat nervous complaints. Pliny the Elder was said to have touted it as a cure for “aberrations of the mind.” In ancient Rome, it was used as a remedy for treat respiratory and digestive conditions, and as an antiparasitic agent. The Romans were largely responsible for it spreading throughout Europe, as it was a favorite flavoring for cheeses and alcoholic libations.

By the Middle Ages, it was used for coughs, rheumatism, nightmares, and menstrual problems. By the sixteenth century, it had been naturalized throughout Europe. In the seventeenth century, it was often used for pulmonary complaints and to strengthen lungs. Thyme oil was popularly used as an antiseptic up until World War I. It has been historically popular as a mouthwash for general oral hygiene and a treatment for mouth sores.

In 1725, the German chemist Caspar Neumann isolated the active ingredient in thyme oil, thymol. Thymol is responsible for thyme’s distinctive flavor and odor, as well as its antiseptic properties.

Experimental pharmacology has suggested that thyme may have some spasmolytic and antitussive properties, owing to components in its volatile oil. Its oil may also have some expectorant activities. In some laboratory studies, it was shown to have some antifungal and antibacterial properties among a small group of studied microorganisms, including Aspergillus, Staphylococcus aureus, and Escherichia coli.

It was shown to have antioxidant activities in a small number of studies. Two of the elements of its oil, carvacrol and thymol, demonstrated some potential to inhibit tumor cells when studied in vitro.

Wild it usually has a higher volatile oil content than cultivated it. Due to over-harvesting wild thyme in some areas of Europe, wild thyme has been in danger of dying out. Efforts are being made by many farmers and seed collectors to preserve the heritage of wild thyme and to conserve it through careful cultivation.

Many varieties of thyme are available on the contemporary market for culinary use, and it is widely enjoyed as a dried and fresh culinary herb in various traditions.

A staple in kitchens and gardens throughout the globe, the humble thyme plant continues to delight the senses.

Mary Cameroon is an editor for leafmother.com. Leaf Mother is a herbal site offering free information about various herbs and plants.