If At First You Don’t Succeed, Try Again and Again…and Again… 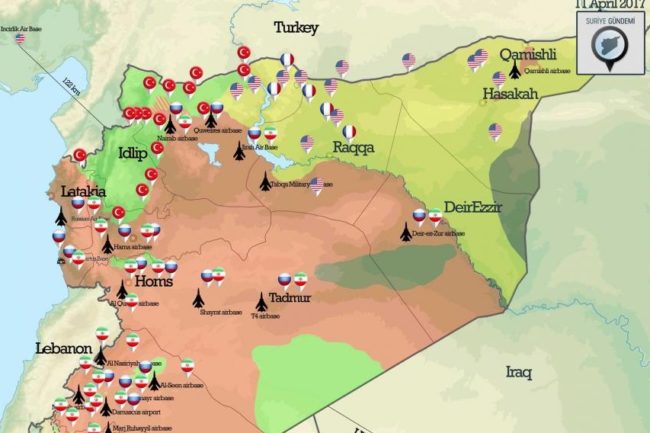 If At First You Don’t Succeed, Try Again and Again and Again
If the title of this article led you to believe it is going to be some kind of an optimistic, personal betterment type of a read then I am sorry for the deception and feel free to exit now – my feelings will not be hurt. In all actuality, what the title is referring to is the American government and Western media’s repeated and flagrant attempts to demonize Syria to the wider world, and in so doing, garner popular support for a full-fledged U.S invasion – something that has been a primary goal of the deep-state for many years now.

Syria has long been on the chopping block of the Israeli/American regime and I refer to them here as one unit because that is the true nature of their master/servant relationship. America’s presence in the Middle East has nothing to do with securing our nation’s national interests’ or ridding the world of violence and terror by employing those exact same methods. No, America is in the Middle East for one reason only: to act on behalf of Israeli interests and to be used as a blunt instrument of force to destroy any and all countries that oppose Israel’s hegemony of that oil-rich region.

Why Syria?
In September of 2000, a Neocon think-tank comprised of ardent pro-Zionists rabidly dedicated to the Israeli cause called the Project for a New American Century (PNAC) released a document entitled ‘Rebuilding America’s Defenses: Strategy, Forces and Resources for a New Century. The document listed 8 countries that America was to invade and regime-change beginning with Iraq and finishing off with Iran. Sandwiched in between those two countries was Lebanon, Somalia, Yemen, Sudan, Libya and….Syria. The document stated that: ‘The process of change is likely to be a long one, absent some catastrophic and catalyzing event like a new Pearl Harbor.’ With the ”election” of George W. Bush, many members of this PNAC organization came to hold positions of power within the administration including, among others: Paul Wolfowitz, Richard Perle, Lewis Libby, Donald Rumsfeld and Douglas Feith. Exactly one year to the month of the document’s release these criminal masterminds got their ‘New Pearl Harbor’ in the form of 9/11 and it has been used as justification to drag American troops into the Mid-East quagmire ever since. Elsewhere in the document North Korea was mentioned as a target for military conflict and we have seen the Trump administration ratchet agitation with them up to a fever pitch. It is important to note that all of the countries listed in the PNAC document have been systematically targeted regardless of who is occupying the Oval Office.

For the past few years it has been Syria’s turn to fend off the forces of global tyranny. Since 2013, America has been funding and arming rebel terrorist groups to create mayhem and to overthrow the democratically-elected government of President Bashar al-Assad. These terrorist groups are depicted in the controlled Western media as ‘freedom fighters’ opposing the ‘tyrannical regime’ of President Assad. In reality, they are CIA/Mossad created extremists who operate under various names – most notably al-Qaeda and ISIS, the very groups America claims to oppose.

Lately, Syria – with the help of Russia – has been winning the war against these Western-backed terrorists. Syrian government forces have been hugely successful in regaining control of their country and liberating its citizens from the grip of these terrorist groups; yes, the very same pro-Assad citizens we are asked to believe he sentences to death via chemical weapons on a nearly routine basis. As you can imagine this has been cause for much distress to those who wish to see Syria become another Iraq or Libya. Just a day before this latest ‘chemical attack’ that is being blamed on Assad’s government, Israel’s Prime Minister Benjamin Netanyahu met with Trump and expressed concern over the U.S President’s stated goal of decreasing America’s presence in Syria ”like, very soon.” A day later, in the aftermath of this ‘attack’, Trump was singing a much different tune. What a wonderful coincidence for Israel! It goes without saying that America should have no presence in Syria to begin with as they are of no threat to our security and of no national interest to us whatsoever. Ah, but alas, this is not about what is good for America, it is about what is good for Israel.

It should be noted that Israel illegally occupies a large oil-rich part of Syria called the Golan Heights, an area that Netanyahu has said Israel will never relinquish despite the fact that the international community rejects Israel’s claims to the territory and regards it as sovereign Syrian territory. With this in mind and when taking into account Israel’s influence over not only Western governments, but Western media as well, is it really any wonder who actually orchestrated this latest ‘chemical attack’ narrative? Do we really believe that Assad, after so successfully defeating the Western-backed terrorists and with the world watching his every move, would decide to use chemical weapons on his own civilians? What would be the motive? This, of course, is absolutely ludicrous and in situations like these we always need to ask ourselves: who benefits?

Play it Again
The ‘chemical weapons’ false narrative has been used and abused over and over again to try and justify invading countries to secure the interests of Israel. In relationship to Syria it has already been used and disproved so many times since 2013 it would be laughable if it weren’t so tragic. The last time this favorite chestnut of the bloodthirsty West was deployed it resulted in Trump responding with a large-scale missile attack on a Syrian Air Force base without any shred of evidence to corroborate his insane and illegal action. Dozens of ISIS-fighting Syrian soldiers were killed in the senseless attack. Ten months later, Defense Secretary James Mattis was forced to admit that there was in fact no evidence that Assad used chemical weapons of any kind, on anybody. Well knock me over with a feather. Shouldn’t these sorts of things be ascertained BEFORE deciding to bomb another country? Apparently not in today’s post-fact world where evidence is no longer a requirement – only the easily manipulated outrage of a brain-dead and apathetic population.

Never one to learn from his mistakes, America’s man-child-in-chief raced to the first podium he could find to condemn this latest ‘attack’ and threaten repercussions against ‘Syria, Russia and Iran’ despite the absence of any evidence once again.  His recent threat to Syria and Russia telling them to get ready because ‘the missiles will be coming’ and they are ”nice and new and smart” show what a reckless troglodyte he really is. America needs a noble and diplomatic statesman as its leader if we stand any chance of resisting the plans for our own demise.  What we have instead, is a moronic blowhard who has quite willingly capitulated to the Neocon forces who are intent on creating a world replete with bloodshed.

Propaganda
It hasn’t only been the ‘chemical weapons’ false narrative employed to demonize the Assad government either. Last year the Israel/America propaganda machine had to reach deep into its playbook to attempt to justify full-scale U.S military invasion of Syria. Enter… Amnesty International. Amnesty, a wholly-owned subsidiary of Western governments masquerading as an NGO, produced a laughable report titled ‘Syria: Human Slaughterhouse’ that claimed the Syrian government had hanged at least 13,000 people in Saydnaya Prison from 2011 to 2015. The ‘report’ was so shoddy and unbelievable that it failed to alarm even the most brainwashed American T.V consuming sponge and has since been widely discredited for its outlandish claims.

The repeated use of baseless propaganda is a favorite tactic of the Israeli/American two-headed Leviathan and has been used effectively to involve American troops in multiple winless wars that serve no national interest and further bury the American taxpayer in unpayable debt to the central banks. It is time that we stop believing such dubious nonsense and quit allowing it to be used as a pretext for more war.

Masks on the Same Face
The war-crazed personalities that have taken over control of this country are in control of every administration that comes to power. This is why although we have had 3 different presidents since the PNAC document was published, the plan for re-drawing the map of the Middle East has continued along unabated. The people in positions of perceived power are following a carefully constructed script that has been written for them by the true ruling elite who don’t change from administration to administration.

The far-fetched excuses for waging war are going to continue on for as long as people keep buying into them. From Iraqi troops throwing babies out of incubators, the recent Skripal poisoning case, to this latest farce, as long as we believe the propaganda and allow it to take hold of our perceptions, nothing is going to change. Israel and America continue on demonizing country after country through their deceitful media network and all the while it is they who are the biggest threats to the peace and security of the world. As long as We The People continue to play the role of the dog chasing after the ball that was never thrown we will all be led into endless more conflicts that serve the interests of but a tiny few.

And so it is that Israeli officials have demanded the U.S militarily strike Syria over spurious and baseless claims in the very same week that Israel itself murdered dozens of unarmed Palestinian protestors and seriously wounded hundreds more, all without a peep of condemnation from the Western world – the self-appointed moral arbiter of planet earth. The tail is wagging the dog here folks.