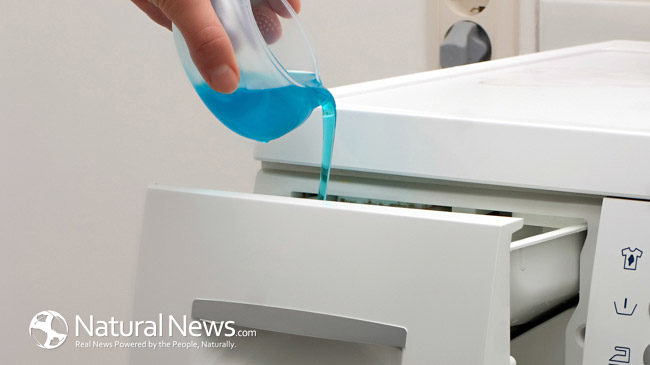 First it was Naked Juice deceiving the public with its claim that its products are “Natural”, and now it’s Seventh Generation.  After almost 3 1/2 months of having a very itchy rash on my chest, eventually extending to my ribs, stomach, back, arms, and slightly making its way below my hips, I finally found the problem in my new Seventh Generation laundry detergent.  The front label claims the following:

When I called the company, the representative asked me if I am allergic to corn.  I confirmed that I am allergic to genetically modified (GM) corn.  She informed me that the product has four “derivatives” of GM corn, and since they are just derivatives, they expect that most people will not have a problem with it, although everybody’s body chemistry is different.  The corn chemicals used in the detergent include sodium citrate, citric acid, protease and amylase, the last two being proteins.  When I suggested that they use organic corn, she said they would keep it in mind, but they had no current plans to make the change.

I am not the only person who has reacted to this product.  A customer comment on their website states the following:  “Just a warning to others with allergies … The “Natural 2X Concentrated Laundry Detergent” is not hypoallergenic, as it claims. I have suffered a severe allergic reaction to the product, and am still recovering (itching rashes all over my body).”

The company’s written response to this individual on their website is almost identical to the verbiage they used when talking to me, which leads me to believe that a number of people are calling about this issue and they have been told exactly what to say.

As most of you know, genetically modified corn is not natural.  It is made of dangerous insecticides that are harming our bodies, killing the bees, and polluting the environment, including organic crops.  It is no secret that derivatives of GM corn are toxic, as NaturalNews has often pointed out.  I do find it interesting that my skin absorbed the chemicals through my clothes as strongly as it did.  This proves that GM corn is dangerous to touch, much less eat.  It also proves how important it is to read ingredients in skin products and detergents, even when products claim to be pure, natural and hypoallergenic.

After rewashing all of the clothing that I believe I have worn in the past 4 months, and still reacting to them, I started to wonder:  If the rinse cycle didn’t remove the toxic chemicals put in my clothes by the detergent, then how many times will I have to re-wash my clothes in non-toxic detergent before they are finally free of GM corn chemicals?  Will they ever be completely free of them, or will I have to replace my entire wardrobe?  I asked Seventh Generation for their opinion and they suggested washing all of my clothes in vinegar.  It is still a little early to determine the effectiveness of the vinegar, but I can say that so far it is not nearly as helpful as I had hoped.

It is apparently no secret that Seventh Generation is deceiving the public.  The National Advertising Division (NAD) is currently trying to get Seventh Generation to change several of its false claims:  http://www.environmentalleader.com/2010/09/10/nad-wants-seventh-generation-to-fix-natural-claims/

To their credit, I have been pleased with the customer service of the company, and they pointed out that they purposely substituted plant-based ingredients for the petroleum used in most laundry detergents.  But they clearly fail to acknowledge how harmful the pesticides within GMO is to human skin, and they are consequently making false claims and causing suffering to their customers.

Vicki Luibrand is a hypnotherapist, certified by the National Guild of Hypnotists (NGH), and has a Doctor of Divinity in Spiritual Healing Arts.  She guides people to heal themselves both physically and mentally by finding and releasing buried emotions in the subconscious mind.  For more information, go to www.believeinhealth.biz.