All About The Health Benefits Of Watercress 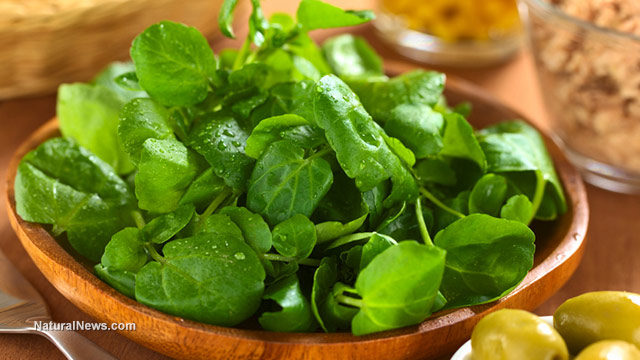 Watercress, also known as common cress or garden cress, is a dark, leafy and aquatic plant grown in the natural spring water or the slow – moving streams. As of being a brassica member of plant genus (along with broccoli, arugula, and Brussel sprouts), watercress’ health benefits are inherited from another Brassica.

Watercress’s versatility ranks in one of the highest levels regarding culinary aspects. It can be mixed with Romaine lettuce and fresh spinach to prepare a green and tasty green salad, steamed and served as a vegetable, and in soups. It’s also a typical ingredient for British sandwiches for both common and high tea.

Watercress contains a high level of dietary nitrate which has been shown to lower the blood pressures, decrease the amount of oxygen needed during exercise and enhance the athletic performance. Moreover, according to the scientists, watercress consists of a higher amount of vitamin C than orange, more calcium than milk, more iron than spinach and more folate than a banana. Watercress has a low level of calories but comprises phytonutrients like isothiocyanates and antioxidants with a plethora of disease-preventive properties which are all required for a healthy body.

It is shown by the studies that a compound of cruciferous vegetables known as 3,3′-diindolylmethane (DIM) has protective effects against cancer; however, these recent studies provide hope for cancer patients for using it as a shield to defend the healthy tissues all along the cancer treatment. Learn more: Turmeric: Nutrition Facts and Health Benefits

In a research conducted at Georgetown University, rats were given a noxious dose of radiation. Several were left untreated; the rest were injected daily with DIM over two weeks. All the untreated rats died, and over half of those obtaining the DIM remained alive at the 30 – day mark. Similar results were received from the same experiments on mice.

Cruciferous vegetables are shown to lower the risk of lung and colon cancer. It is also convinced that the sulfur-containing compounds (namely sulforaphane) that provide cruciferous vegetables their bitter taste are also what bring them their cancer-fighting power. Sulforaphane is now being studied for its ability to defer or impede cancer with early promising results along with melanoma, esophageal, prostate, breast, and pancreatic cancers. It has been found that the enzyme histone deacetylase (HDAC), which involved in the progression of cancer cells, can be restrained by the sulforaphane.

Watercress also consists of a great amount of chlorophyll, which might be beneficial at impeding the carcinogenic effects of heterocyclic amines generated while grilling foods at a high temperature.

Those who consume diets which have a low level of magnesium, calcium, and other mineral elements might bear a higher chance of having high blood pressure. By releasing the sodium out of the body and helping the arteries dilate, these mineral are thought to bring the blood pressure down.

It is significant to acknowledge that consuming these minerals in supplement forms will not provide the same health benefits as they do in food. Since watercress contains all these different and healthy elements, it is recommended to eat watercress with higher frequency.

Regarding a 2013 study published in the British Journal of Clinical Pharmacology, foods containing dietary nitrates like watercress and beetroot have been proved to have multiple vascular benefits, comprehending lowering blood pressure, impeding platelet aggregation and conserving or enhancing endothelial dysfunction.

It is proved that low intake of vitamin K is one of the highest likely reason leading to bone fracture. With approximately 212% of vitamin K in two cups of watercress, it is highly recommended to take adequate vitamin K which acts as a modifier of bone matrix proteins, to improve bone health, calcium absorption and lowering urinary excretion of calcium. See more health benefits of fruit that contains vitamin K: Cabbage: Nutrition Facts and Health Benefits

Scientists recommend that having one cup of watercress daily to meet the necessary requirement of sufficient amount of vitamin K.

The antioxidant alpha-lipoic acid which is found in watercress is indicated to minimize the glucose levels, intensify insulin sensitivity and restrain oxidative stress-induced changes in patients with diabetes. Studies on alpha-lipoic acid have also demonstrated a reduction in peripheral and autonomic neuropathy in diabetics.

As a nutrient – rich and perennial plant growing near natural springs or small slow – moving water sources, watercress has been known for centuries as an outstanding nutritious herb for both eating and healing. Watercress’s culinary aspects are undeniable as well as the health benefit of it. It can be used as a fresh vegetable in green salads, sandwiches or steamed as a side dish.

Those vitamins A, K and C and phytonutrients like isothiocyanates and gluconasturtiin found in watercress help to strengthen the bones, reduce the risk of neuronal damage, prevent infection, retain healthy tissues and impede iron deficiency. Studies have discovered that both the breast cancer and the DNA damage in cells can be suppressed by the compound PEITC found in watercress.

These overlooked, leafy and green vegetables can be found in most supermarkets, so give it a try when you make your next sandwiches or salads. However, please remember to rinse and soak well before serving as watercress from stagnant springs may host harmful parasites or pathogens.