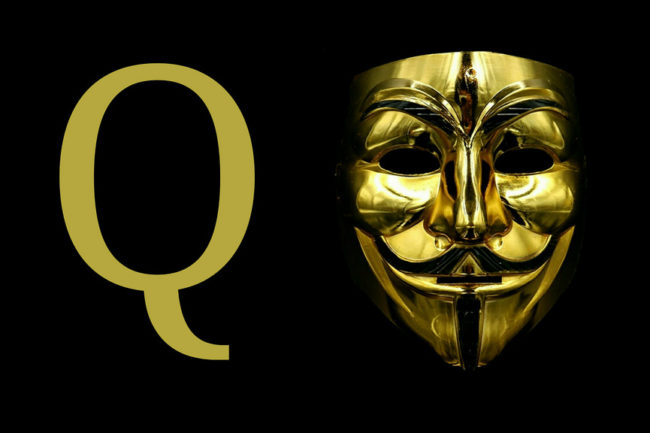 Q-Anon released a 4-Chan post on April 29th where he/she/it attacked people in the patriot movement who are attempting to make money from people in the patriot movement. In response, the Q-Anon community began viciously attacking anyone who provides news products, books, video productions, and articles – and who also ask for donations or attempts to sell products to their audience.

Q-Anon and his community have apparently turned into group-thinking Socialists. This is America, and in America we have what is called a “free-market,” where if you provide a product for people, and people choose to pay for that product, there is nothing wrong with that. If the alternative media is ever to grow large enough to replace the propaganda mainstream media, then alternative media outlets require funding IMMEDIATELY in order to fund its growth and have the ability to reach larger audiences.

One of the individuals being attacked by the Q-Anon community is Jerome Corsi. The Q-Anon community uncovered information showing that Corsi had some financial connections to the Rothchild’s back in the early 1980s. Some Q-Anon followers have even assessed that Jerome Corsi “helped launch a mutual find to invest in formerly Communist Poland after the fall of the Soviet Union,” which is a misinterpretation of what really happened. (Q-Anon Community, 2018)

Corsi may very well have been financially tied to the Rothchild’s back then, however, what the Q-Anon community is failing to recognize is the fact that funding for authors/ independent journalists was hard to come by back in those days. Nowadays it is easy enough to use the internet to collect funds and work on a journalistic project. However, back in the early 1980s you would have to receive funding from people who had the money, like the Rothchild’s.

This incident which Q-Anon followers are referring to was litigated in court, and Corsi won that case. This was a business dealing, just like MANY business dealings which happen every day across the world. Corsi was attempting to make some money, and back in the early 1980s, the Rothchild’s were not yet exposed to be the corrupt Socialist wannabes we know them to be now, therefore how can you blame Corsi for trying to make money? Does he still have close connections to the Rothchilds? No, he does not! This was in 1981!!!

The Q-Anon community banded together and attack Jerome Corsi hard, basically ostracizing Corsi from the Q-Anon movement. A few months ago, Corsi was their favorite analyst of Q-posts, and now everyone hates him for a financial transaction he was involved in back in the early 1980s. They fail to mention Corsi’s extensive history of exposing government corruption and the Socialist movement called “Globalism.” He has been exposing George Soros and Hillary Clinton for YEARS, and the Q-Anon community’s group-think attacks on Crosi are entirely unjustified, and flat-out wrong. (Jerome Corsi Bibliography, 2018)

The bottom line is that Q-Anon followers believe they have some connection to a deity in their connection to Q-Anon, and they feel as they are infallible fallen angels from their God…Q-Anon. Q has been incorrect numerous times, even though the hardcore Q followers will deny and deflect that accusation in any way they can. Beyond being incorrect occasionally, no one should EVER put 110% of their faith in a cryptic 4-Chan poster. Realistically, Q-Anon COULD be anyone, or anything! Yet these hardcore Q-people are wearing Q hats, their profile pictures are of the letter “Q” and everything is “Q” to them…they are seemingly unable to think for themselves or think outside of the Q-Anon box.

The issue here is that Q-Anon followers have a responsibility they are seemingly unaware of. If you are going to gather a group of people to viciously attack someone, you better have your facts straight…because if you don’t…then you are destroying someone’s credibility over hap-hazard research and misinterpretations.

What is going on with the Q-Anon community is worrisome because these people claim to be American patriots, yet they are using Socialist tactics of group-think, mob-mentality, and pushing for a Socialist economic system.

Personally, I think the most disturbing part of all of this is the fact that Q-Anon made a claim that “Those who would seek personal gain at the expense of others in this movement has an agenda,” and his community interpreted that as though ANYONE asking for donations or selling a product is somehow a traitor to the patriot movement. I don’t believe that is what Q-Anon was really saying…but this is how his/her/its community took these comments. Now, if you run a website, Facebook Page, YouTube Channel, or other platform and you are asking for money from your audience, the Q-Anon community will label you as a traitor to the patriot movement.

Uhhhhh…EARTH TO Q FOLLOWERS…This is America, where if you provide a product and people want to pay for that product, then SO BE IT! How are independent journalists going to be paid for their hard work? They should just give up their time and energy in trying to report the truth for the American people and not earn any fruits for their labor? This is Socialism…is this what Q-Anon and his followers desire? Socialism?

I can’t speak for Jerome Corsi, but I personally spend many hours each week producing videos, updating the website, writing articles, and providing news products to an audience. A few people in my audience donate to me every month, and that makes me encouraged to provide MORE products and grow my small organization. If I am ever to grow my little news gig here at Clear Sky News, I am going to NEED funding somehow, and just because Q-Anon claims that those who collect money for their journalistic work are traitors the patriot movement, that doesn’t mean that claim is true…by any means!

Jerome Corsi has blown this off and he is continuing his reporting on the truth. America does not NEED Q-Anon in order to expose the corruption and the ongoing Coup de Etat happening in this country. The crimes of the seditious criminals in our government have already been exposed, and it is only a matter of time before justice is handed out – with or without Q-Anon!

*** Side note: If you are an independent journalist providing a product for an audience, then you have every right to ask for donations or sell products. Q-Anon is the not the approving authority for how you choose to run your independent news organization. ***

Alex Jones and Jerome Corsi discuss current events with Q-Anon and all of this nonsense happening surround Corsi.  (Jones, 2018):