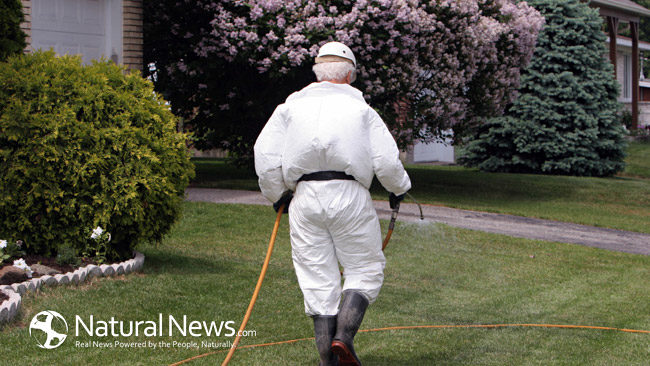 If the government really cared about the environment, they would ban lawns.

The grass typically used as ground cover—often the sole landscaping feature surrounding American homes—is a black hole for water, as well as a dumping ground for chemicals like fertilizer and pesticides that people use without thinking.

Because lawns are non-native to most of the U.S., it takes an inordinate amount of chemical assistance to keep them alive. Even as the country embraces the merits of organic gardening and GMO-free produce, they continue to drop more than 30 thousand tons of pesticides and 3 million tons of fertilizers literally in their back yards every year.

Considering these are the same areas where pets and children are expected to play, the idea of spraying them with poisons and petrochemicals might seem abhorrent; instead, it is seen as a point of pride for suburban homeowners to show-off their commitment to home ownership.

In progressive circles, alternative gardening practices like xeriscaping have gained a slight foothold. Replacing wasteful, unhealthy landscapes with native plants that are adapted to the climate and thrive naturally, xeriscaping is both low-cost and low-maintenance. It also contradicts mainstream tastes that favor shining green yards, regardless of the cost in resources and personal health.

Decades of social conditioning have made Americans’ behavior toward their lawns seem normal, despite the incredible amounts of money they go through every year keeping their grass alive and artificially green. In California, where drought conditions are making it impossible to keep grass green, companies have emerged to paint lawns, lest the neighborhood look as thirsty as it actually is.

If you have to paint your yard to make it look healthy, it is time to reconsider whether a different approach to gardening is called for.

While California grapples with the challenges of a devastating drought, citizens have been encouraged by leadership to cut back on water usage by taking shorter and few showers, being more deliberate about dish and clothes washing, and reducing how much they water their lawns. They would save more water immediately if lawns were simply prohibited—not to mention all the arable land that would be opened up to more water-efficient, environmentally friendly plant species, or even vegetable gardens.

Grass is by far the most widely-grown crop in the United States—yet it provides no tangible return that couldn’t be multiplied by planting virtually anything else in its place.

In terms of water usage alone, home-grown vegetables require less total water to thrive, as well as giving consumers greater control over their diets and ensuring that organic produce really does mean organic. More importantly, the water vegetables do require is returned to the environment when they are consumed; grass clippings that get bagged and dumped into a landfill are essentially sequestering clean water every week without purpose.

Mowing lawns also contributes significantly to air pollution, as mowers are significantly less efficient than vehicles. Just as bathers and dishwashers catch attention for wasting water, commuters are targeted for worsening air quality with unnecessary miles on the road; in both cases, reversing course on lawns would be more efficient and direct at providing a solution.

There is no substantive argument in favor of grass lawns other than tradition, but the old novelty of making American yards look like English yards (where the custom was imported from) has more than worn out its welcome.