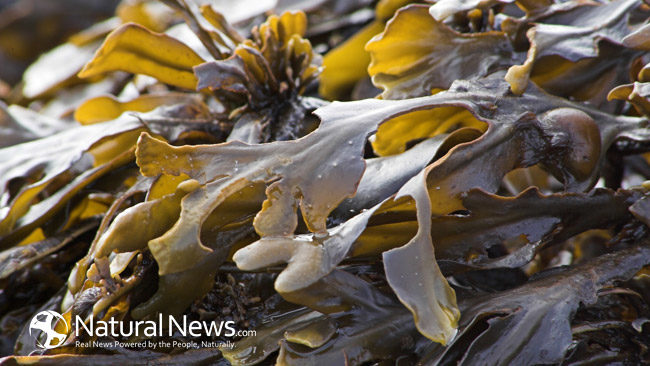 As the nutritional value of land vegetables continues to decline due to ongoing soil erosion and pollution, sea vegetables – whose nutritional compositions have remained intact for centuries – are coming to the fore as a much-needed source of minerals. Indeed, the average seaweed still contains over 70 essential minerals and phytonutrients, as well as numerous compounds that can pull unpleasant toxins from our bodies.

Though all sea vegetables contain a large number of health benefits, some stand out more than others in one or more categories. The four seaweeds listed below fall into this group.

Kelp is arguably the greatest “all round” seaweed, since it is rich in virtually every nutrient our body requires for superior health. For example, kelp contains impressive quantities of all the major vitamins (vitamins A, B, C, D, E, and K), which play numerous roles in ensuring our biological processes run smoothly. Kelp is also filled with dietary fiber, protein, countless trace minerals, and sodium alginate – an element that helps the body to rid itself of radioactive particles. (This is especially important post-Fukushima, since while both sea and land vegetables are affected by this disaster [85 percent of rainwater comes from the oceans], few land vegetables can eliminate these particles).

Bladderwrack was Europe’s original source of iodine, and it remains the ocean’s greatest source of this essential trace nutrient (50 grams of bladderwrack contains more than 100 percent of our recommended daily allowance of iodine). Iodine is needed to regulate the thyroid gland, which in turn regulates the metabolism. People who have difficulty losing weight despite dieting and exercising heavily, for example, are often suffering from thyroid dysfunction.

Bladderwrack is also rich in zeaxanthin and fucoidan. Zeaxanthin is a natural carotenoid that helps guard our eyes from oxidative harm, thus guarding us from eye-related disorders such as macular degeneration. Fucoidan, a polysaccharide found in the cell walls of brown algae, has been shown to inhibit tumor growth and regulate the production of AP-I (which regulates cell proliferation), making bladderwrack an excellent cancer-fighting food.

Nori, which is famous for its role in wrapping sushi and garnishing noodle dishes, is the greatest seaweed source of protein. Indeed, depending on its quality, nori is comprised of between 30 and 50 percent protein (a comparable amount to soybeans, spirulina, and chlorella), making it an excellent source of bioavailable, plant-based protein for vegetarians and vegans. Protein, of course, plays a crucial role in the growth and repair of cells; a deficiency can lead to muscle and joint pain and a constant craving for unhealthy foods such as refined carbs and sweets.

If bladderwrack is the king of iodine and nori is the king of protein, then hijiki is surely the king of calcium. In fact, studies show that there is more calcium in hijiki than that contained in an equal weight of cow’s milk. Moreover, hijiki boasts an optimum calcium-magnesium ratio of 2-1 (we need magnesium to help us absorb the calcium).

Perhaps hijiki’s impressive calcium content explains why this brown seaweed is so closely associated with healthy, lustrous hair in Japanese folklore. Indeed, hijiki – with its smooth appearance and delicate curls – even resembles human hair as it grows on the ocean floor.