Forest Bathing: A New Way to Reduce Stress and Lower Blood Pressure by as much as 13% 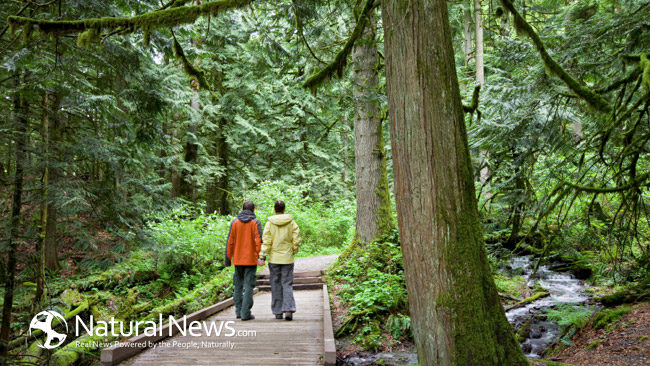 More than 29% of Americans suffer from high blood pressure, and as much as 50% of people aged between 24 and 32 don’t even know about it, as studies reveal.

High blood pressure, formally known as hypertension can lead to stroke, heart attack, heart disease, dementia, kidney disease, heart failure and erectile dysfunction. The Center for Disease Control and Prevention has indicated that up to 1000 people per day die from hypertension!

Hypertension is primarily caused by stress and poor lifestyle choices, such as a diet rich in sodium and insufficient movement. Walking or running can decrease hypertension by as much as 7%, and forest walking has a compound health effect.

Studies conducted in Japan have proven that forest bathing, known as “Shinrin-Yoku” can have the most dramatic and positive effect on our health, some effects including: reduced stress, strengthened immune systems, dissolved depression, improved sleep and generally an increase in the feeling of vitality.

Yoshifumi Miyazaki, Japan’s leading scholar on forest medicine has proven that forest bathing provides preventative medical effects due to the calming, chemical nature that wooded areas provide. Plants emit chemicals known as ‘phytoncides’, which is an organic substance that protects leaves from fungi, insects and bacteria. By spending time in forests, we are exposed to over 120 of these phytoncides, and therefore our immune systems, hearts, blood, brains and hormones are offered a refreshing shift towards better health.

His experiments between 2005-2008 were conducted between Hokkaido and Okaniwa, and included 38 different forest sites. He noted a decrease in blood pressure, lowered stress hormones, a calmer heart rate, an improved immunity and even an anti-cancer effect in every forest walking volunteer.

This confirmation sparked a formal study involving 288 volunteers in 24 different sites, and factored in: the cortisol levels in saliva, blood pressure, heart rate and autonomic nerve activity. It also included the study of the effect of natural environments on the brain for the first time.

The Results Were Remarkable:

Spending 30-90 minutes walking at their own pace resulted in a 13% decrease in cortisol, which is the body’s stress hormone. It also reflected an immediate 2% decrease in blood pressure, a 6% decrease in heart rate and an 18% decrease in sympathetic nerve activity.

How Do I Implement Shinrin-Yoku?

35% of North America consists of forests, and as much as 40% consists of wooded, forest like areas. While 80% or 422 million Americans live in urban areas, research has shown that many of us live within ten minutes of a forested area.

In Britain, 12% of land is attributed to forests, and again, almost every person is within a 4 km reach of a forested area, or at worst, a lush park.

By practicing Shinrin-Yoku, you will learn how magnificent and calming nature can be, especially for improving your overall health. Just 30 minutes a day a few times a week can make all the difference, leading to better sleep and better health in every earthy breath.