Flu Shots for All? 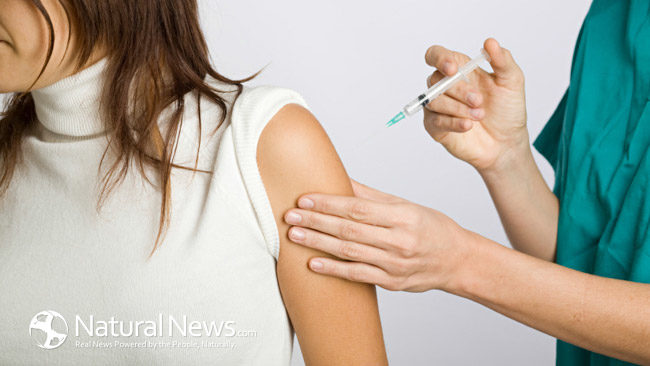 Winter is a tough time for most, especially those of us here in New England. It is a time when many people often feel a bit ‘under the weather’. This is nothing new. What has changed in recent years is people’s ways of dealing with such inevitabilities and there is certainly a growing hysteria, bordering on the maniacal, about making sure to get a flu shot. This in spite of the fact that, as has been reported even in the mainstream media, this year’s flu shot has only been roughly 10 percent ‘effective’. It is a peculiar set of circumstances when people willingly allow themselves and their children to be injected directly without even a cursory investigation into what it is they are being injected with. Such blind faith in the word of an establishment that realizes massive profits from keeping people sick is beyond impetuous, it is completely irresponsible.

What people would come to find out if they took it upon themselves to do even a minimal amount of investigation, is that the flu shot contains poisonous metals such as aluminum and mercury, as well as the known carcinogen formaldehyde. Strange, isn’t it, to think that pregnant women who are advised against eating tuna fish on the chance that it may contain mercury are not given the same warning against getting it injected directly into their blood stream. Tuna fish can contain anywhere from 250-500 parts per billion (ppb) of mercury while just one flu shot contains 51,000 ppb. That is 21,000 times the legal maximum for drinking water! The hemming and hawing that goes on to try and cast the presence of these toxins in a harmless light is pathetic to behold. The fact is that no amount of mercury, aluminum or formaldehyde is safe to ingest let alone via injection. Mercury teeth-fillings have already been banned in some countries and the same goes for mercury thermometers, yet Thimerosal, a mercury-containing compound, remains in the flu shot. It is important to bear in mind that a fetus is most vulnerable to the effects of the known neurotoxin mercury and the flu jab is routinely given to pregnant women.

In 2013 Minnesota passed a law which banned formaldehyde from children’s products because it is known to cause cancer. However, a legal dispensation was created allowing it to remain in vaccines including the flu shot. How is it that a known carcinogen isn’t safe for children’s toys but is apparently ‘safe’ enough to inject them with? Answer: It isn’t. The same could be said for the ‘adjuvant’ aluminum which is irrefutably linked to Alzheimer’s and all sorts of other neurological diseases. People need to start doing some research, apply their own God-given intuition and intellect to the world in which they live and stop taking the mendacious claptrap of bought and paid for pharmaceutical lobbyists and establishment media lackeys at face value. These purveyors of snake oil are paid exorbitant wages to hawk their wares and be a wholly-owned mouthpiece of the pharmaceutical cartel. They shouldn’t be trusted to tell you the time of day.

Oftentimes people wonder out loud how it has come to be that our world is now one so replete with cancer, Alzheimer’s and an assortment of other ailments which are so prevalent these days as to be an almost expected part of normal life. An obvious conclusion to draw based on the evidence would be that the ingredients in vaccines are certainly at least partly responsible. When this compelling argument is presented however, it is usually met with fierce resistance from those who are more than willing to accept the comforting lies of the medical establishment and protect their cozy and safe worldview; one in which government and corporations truly have the welfare of the citizens as a top priority and can be counted on to take care of us all, not unlike a nurturing mother would, or perhaps more accurately, a big brother.

Constant repetition is one of the more effective methods of propaganda and the hysterical around-the-clock demands to ‘get a flu shot today’ have a lasting impact upon many people. And so it is that we find ourselves in a rather odd situation whereby completely healthy people decide to get themselves and their children injected for protection against a flu that they do not have. Usually this is done without considering for even a moment that just maybe their biological God-given immunization known as the immune system is working exactly as it is supposed to be and, in fact, is precisely to thank for their state of current health. Such an evident realization would seem foreign to most people who have spent a lifetime kneeling in divine reverence at the altar of the great Western demigod science. One need only to consider how many pharmacies are literally giving away free flu shots to appreciate that a rather pernicious agenda is being played out. Nothing is given away for free in these troubled times, not least of all things that are beneficial to human health and well-being.

In the ever-quickening race to make vaccines mandatory a few apparent facts tend to get overlooked. Chief among them is that, as humans, none of us process things the exact same way. Thus, although peanut oil and penicillin for example, can be extremely beneficial to many people, others have serious reactions to them that can result in death. The difference in this case is that when a person has an adverse reaction to penicillin or peanuts they are told by a doctor to avoid them at all costs. On the contrary, when somebody has a negative reaction to a vaccine they are told that it is just a coincidence and to keep getting them! The indoctrination of doctors into the Big-Pharma worldview runs deep and in many cases is nearly impenetrable. Always remember, few things are so exclusively harmless as to be good for the whole of humanity without any exceptions – not least of all poisonous metals and known carcinogens whose potential to wreak havoc upon human health is well documented and widely known.