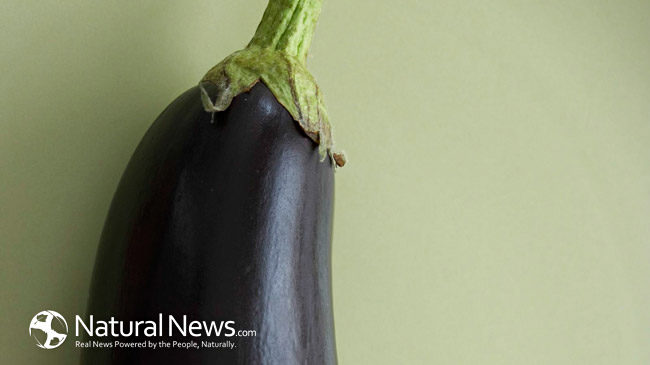 Eggplant is a low calorie vegetable known as an aubergine — very popular in the Mid-East, China, and India. Eggplants belong to the Solanaceae plant family, since it is an ornamental, flowering perennial, and fruit-bearing vegetable. They are also known as nightshades and are a close relative of the tomato, potato, and bell pepper.

Nearly to 2,000 years ago, eggplants grew wild in its native country, India. It was first cultivated in the 5th century B.C., in parts of China.  Eggplants first appeared in Europe in the 14th century. Thomas Jefferson originally introduced the vegetable to America in the 1700s.

But, the eggplant has only been considered a vegetable within the last 100 years. In fact, at one time people believed the vegetable was responsible for causing leprosy, cancer, and insanity. Centuries after eggplants were brought to Europe, they were used as an ornamental plant rather than part of a diet.

Times have changed for this delicate, tropical perennial and traditional comfort food.

Health Benefits of the Eggplant

Eggplants offer a variety of health benefits. They are rich in antioxidants and a great source for cardiovascular health. They also offer free radical protection and provide an assortment of vitamins and nutrients.

Geneticist John R. Stommel of the ARS Vegetable Laboratory and plant physiologist Bruce D. Whitaker of the Produce Quality and Safety Laboratory, both researchers in Beltsville, Maryland, joined forces and evaluated the amount of antioxidant phenolic compounds in a wide variety of eggplants.

The research team found chlorogenic acid to be the primary compound in all the samples they analyzed. This discovery is important because chlorogenic acid and chemical organic compounds of caffeic acid are part the most powerful free radical scavengers found in plant tissues. Benefits reported include reducing mutations, antiviral, antimicrobial, and anti-LDL activities.

The current data shows that phenolics in eggplants are good for people, but the vegetable may also taste bitter. The researchers suggest that eggplants with the highest level of antioxidants taste the most bitter.

Eggplant is low in calories – close to 35 per cup. They are high in fiber, which helps satisfy hunger and they help protect the digestive tract.

Eggplants that are heavy and firm for their size are the best choice when selecting the vegetable. Whether the vegetable’s color is purple, green, or white, the color should be vivid. The skin should be smooth and shiny — free of bruises, scars, or discoloration.

Gently press the skin of an eggplant to check for ripeness. If the skin springs back, it’s ripe. If there’s an indention after pressing the skin of the eggplant, it is not ripe. The cap and stem should be bright green, as well.

Eggplant is highly perishable. If it is purchased wrapped in plastic, remove the plastic, since the plastic will keep the eggplant from breathing and cause it to lose its freshness. Store the unwashed, uncut vegetable in a plastic bag in the refrigerator crisper — at close to 50 degrees Fahrenheit — for only a few days.

Eggplants were once used by Asian cultures as a traditional medicine. Now, millions of people have found this traditional vegetable to be a delicacy for dishes, like eggplant parmesan and casseroles with other vegetables, herbs, meat, and cheese.

Eggplant is also served in a variety of delicious recipes like mousaka, an eggplant casserole, and baba ghanoush – a mashed eggplant preparation similar to South Asian baingan ki bartha.

Wash eggplant before preparing and cooking. Large or white eggplant skins can be tough to chew. Some cooks prefer peeling away the skin before cutting the vegetable. Others scoop out the inside of an eggplant after baking.

The preferred method of cutting the eggplant is with a stainless steel knife. A carbon steel knife will turn the inside of an eggplant black.

To help reduce the bitter taste and tenderize the vegetable, “sweat” the inside with salt. After cutting the vegetable in slices, sprinkle a little salt on each piece and let it rest for about 30 minutes.  The sweating process also helps to draw out some of the water in the plant and helps keep oil from being absorbed in the vegetable.  The salt can be removed by rinsing the eggplant with water.

Eggplant can be steamed, boiled, roasted, and baked. Before baking, pierce a few holes in the eggplant with a fork to allow steam to escape while it cooks. Bake it at 350 Fahrenheit for 15 to 25 minutes. Check to see if it is done cooking by piercing it with a fork or knife and see if it passes through the vegetable easily.

Good health includes a diet with a variety of disease preventing foods and drinks, rather than concentrating on individual foods. Moderation is the key.