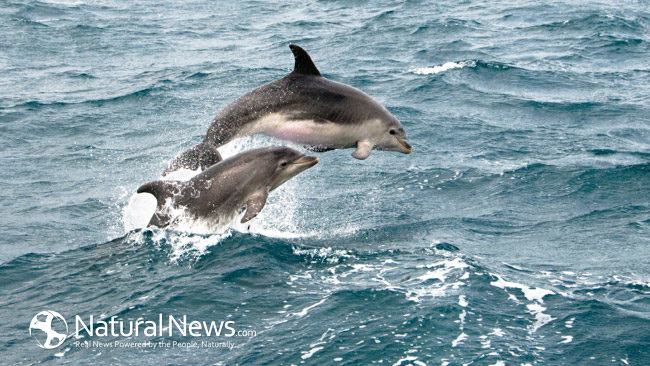 Bottlenose dolphins with deformities including missing teeth and lung disease have been found in the Gulf of Mexico a year after the BP oil spill, according to US researchers.

The mammals were also suffering from hormonal imbalances, Pneumonia and liver disease, while a pregnant female was found carrying a dead foetus.

The first major study into the health of dolphins comes after the Deepwater Horizon oil rig exploded in April 2010 and saw the equivalent of 4.9 million barrels of oil gush into the sea.

During the study, researchers briefly captured dolphins off the coast of central Louisiana in 2011 to check their health.

Half of the 32 dolphins studied were judged to be seriously ill or in danger of dying.

The health of the animals was compared with 27 bottlenose dolphins from the Sarasota Bay, Florida, which was unaffected by the oil spill.

These dolphins had significantly lower levels of adrenal hormones, which are critical to an animal’s stress response, while moderate to severe lung disease was five times more common in Louisianan dolphins.

“I’ve never seen such a high prevalence of very sick animals,” lead author Lori Schwacke, a researcher with the National Oceanic and Atmospheric Administration and an expert on dolphins in the southern US.

“There is disease in any wild population. We just haven’t seen animals that were in such bad shape as what we saw in Barataria Bay,” she added.

Three of the Barataria Bay dolphins had also lost nearly all their teeth, and three others had just half of their normal number of teeth left. Dolphins typically have between 78 and 106 teeth.

Oil firm BP said the report, which appeared in December issue of the ‘Environmental Science and Technology’ journal was “inconclusive as to any causation associated with the spill”.

BP also called on NOAA to release all of its data on the unusual deaths of more than 1000 dolphins off the Gulf Coast, dating back to February 2010, three months before the spill.

Scientists admitted that their study cannot prove that the dolphin’s health problems were caused by the Deepwater spill because there were no studies of dolphin health prior to it.

But the Louisiana dolphins had lower levels of pesticides and flame retardant chemicals than the Florida group, suggesting that agricultural runoff and common pollution were not the cause of their diseases, researchers claimed.

Jordan Markuson is the Founder of Aqua Health Labs. He has been a conservationist, nutritionist and writer for over 10 years. He is an activist supporting consumption of raw, renewable, and organic foods. Jordan believes that based on all available scientific evidence, once food is processed it loses the majority of the important nutrients. He is very interested in marine-based phytoplankton as a fish oil replacement because of the pure omega-3 EPA & DHA essential fatty acid it produces.