Death of 19 firefighters in Arizona begs the question: Why do we keep putting out forest fires in the first place? 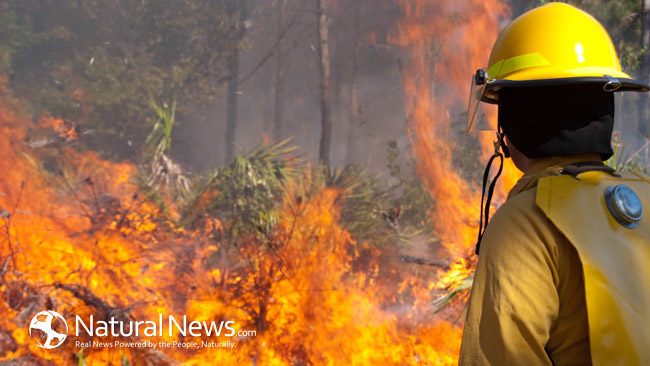 (NaturalNews) Long before humans ever arrived on the scene, forest fires burned themselves out naturally. The forests re-grew and the cycle repeated: fire and rebirth, fire and rebirth. Over and over again for millions of years.

This was never a problem until humans came along and decided to build expensive homes and commercial buildings in forested areas that eventually catch on fire. These “fire zones” would, of course, burn up sooner or later, but people wanted to live there, so they bought fire insurance and built their homes anyway.

The inevitable cycle of fire eventually arrived. Forests catch on fire from lightning or some other cause, but the only reason the fire spreads is because the forests are full of fuel in the form of fallen branches, shrubs and other combustible material. So the fires burn fiercely, as they have always done throughout the history of the planet, “cleaning out” the underbrush and giving many plants and trees a fresh start.

But this is not acceptable to the people who built their homes in the fire zones. They scream, “Put out those fires! I’ve got to protect my home!” It’s not an unreasonable reaction in the immediate term.

So they send other people’s sons and daughters — smoke jumpers and firefighters — into the jaws of death to battle the blaze and try to extinguish it. As you might guess, sooner or later some of these firefighters end up being killed by the fires.

That’s what’s happened yesterday in Arizona: 19 firefighters were killed fighting a forest fire. And what were they killed fighting for? Homes. Homes that never should have been built in fire zones in the first place. Homes that were built in areas that have burned a thousand times over and over again throughout history and will burn again.

It’s time we seriously revisited this question: Is it worth losing lives just to protect property from a fire that history already showed would be inevitable?

Here’s an even better question: How does putting out these fires do anything in the long run? If the forest doesn’t burn up its fuel today, it’s just going to have more fuel tomorrow, meaning that future fires will be even more fierce and more deadly for the forest ecosystem.

I’ve looked into this issue quite a lot, and I’m convinced that putting out forest fires is bad policy. It causes more harm than good over the long haul, turning frequent small fires that “clean out” underbrush into monstrous, deadly fires that kill entire forests and destroy communities. And as I’ve seen in central Texas, immediately after a huge fire destroys someone’s home, they take the insurance money and rebuild in the exact same spot that will burn again in another fifty years or so! Why is it so difficult for people to see these patterns?

Putting out most forest fires is irrational and harmful

The truth is that forests are supposed to burn from time to time, and putting them out is an irrational, illogical human intervention that needlessly puts lives at risk for no justifiable reason. It also harms the forest.

This is the honest answer on the issue of forest fires: people should not build homes in forest fire zones unless they are willing to see them burn. I realize it’s not politically correct to suggest that people should be responsible for their own actions and decisions, but denying the reality of this won’t make you any safer. The truth is that all forests will eventually burn, and if you build a home or a business in ANY forest, your home or business will eventually burn.

Furthermore, I happen to think it’s morally wrong to ask other people to put their lives at risk to extinguish these fires. We should let them burn and focus on evacuation and rebuilding.

And yes, this even applies if, as people will say, “someone set this fire.”

So let me explain the physics of how forest fires really work. If you SET a fire in a forest, you are responsible for the immediate area that you set fire to, but not the other 50,000 acres (or whatever) that burned up because the forest was ready to burn from any ignition source, including lightning. When a forest is ready to burn — i.e. it has enough fuel to spread the fire — it’s going to burn and spread no matter what the ignition source. It is irrational to blame one person for a small fire in the forest when it is the property of the forest itself that causes the fire to spread.

I’m always amused when some news program says, “A small campfire spread to become a 50,000-acre blaze.” Oh really? I very much doubt that one match can set fire to 50,000 acres unless the forest itself lends a huge helping hand in spreading the fire. No one can force 50,000 acres to burn unless it wants to burn.

Quick quiz: Why do most camp fires NOT cause forest fires? Because most forests are not yet ready to burn. (They don’t have enough fuel, or they have too much moisture.) When a forest isn’t ready to burn, you can run around throwing flares everywhere and they will all just fizzle out. Why? Because the recipe for fire just isn’t there.

Fires require THREE things to spread: Fuel, heat and oxygen. The atmosphere provides the oxygen and the forest provides the fuel. “Starting” a fire means applying high heat to a very small area until combustion is achieved. From there, the fire only spreads when the forest itself provides sufficient fuel to keep the heat replicating and spreading.

Thus it is irrational to blame one person for a 50,000-acre forest fire. No person can run around applying heat to 50,000 acres. It is the forest itself that provides the means of spreading the fire, and once the fire burns out, that forest is “non-combustible” for many decades to come!

In fact, the best way to prevent forest fires is to start forest fires and let the forests burn out so that they aren’t combustible. This is precisely why firefighters set fires to burn out selected areas and create “firewall” that can no longer combust.

Yes, this is the origin of the term “firewall,” for all the network engineers out there. You actually set a fire and burn down an entire wall of trees in order to PREVENT a much larger fire from spreading even further.

By the way, I’m not saying you should run out and throw matches everywhere. This kind of “prescribed burning” strategy is best left to your local fire marshal. If you actually try to start forest fires without knowing what you’re doing, you could end up getting people killed, so don’t try it. (Prescribed burns take place in very specific weather and wind conditions in order to keep the fires well controlled.)

Overall, don’t buy into the myth that we need to risk the lives of thousands of brave firefighters every year putting out forest fires. The truth is that most forests would be better off if we would let them burn. And we humans would be better off if we stopped building homes in forested areas that are sooner or later going to catch fire due to the simple fact that forests produce fuel, and fuel eventually burns.

There, I said it. Now let the bashing begin, as I have uttered the truth about forest fires, meaning I will be viciously attacked by ignorant sheeple who believe everything they’re told on TV news. “Forest fires are BAD! Put them all out! Hurry!”