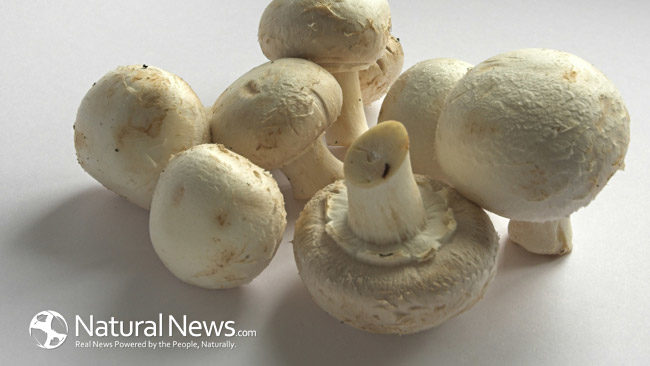 Many mushrooms do contain small amounts of vitamin B12, a vitamin of which we have been told that it is not available in plants. Common mushrooms are one of the mushrooms containing a small bit of B12. However, opponents of this fact say that there is only B12 in common mushrooms because of the way it is produced, with the use of animal manure. On the other hand, wild mushrooms with B12 have been found.

To end the discussion: in 2009 Chinese researchers found out that vitamin B12 grows on the surface of the mushroom, and it is produced by bacteria. This study shows that vitamin B12 is a part of the common mushroom. Now, still we must ask ourselves: why is it that some commercial button mushrooms don´t contain B12 anymore? What do farmers do wrong?

B12 is only with 3% of the RDA in mushrooms.still, it is untruthful to say that B12 is not to be found in plants at all. 87 gram of common mushrooms delivers 25% of the RDA of vitamin B2, 17% of B3, 13% of B5, 32% of selenium and, 22% for copper. These vegetables contain a long list of nutrients of which there is no RDA recommendation yet. Some of this phytonutrients promote the normal function of white blood cells. In other words: These cream-colored white friends are boosting your immune system.

Button mushrooms or common mushrooms have a good effect for people who suffer diabetes type 2. This vegetable helps controlling the blood sugar level.

Common mushrooms have an inflammation reducing effect. Many diseases like diabetes type 2, cancer, cardiovascular diseases are being caused by low grade inflammations or inflammations on cellular level. Mineral antioxidants like selenium, manganese and zinc play a role in this beneficial property. Ergotheonein is an amino acid with antioxidant functions. All these components together prevent cholesterol oxidation.

Scientific research shows that common mushrooms have a ability to kill cancer cell lines of cancer of the prostate and breast. It is good to know that not only the antioxidants and the improved immune system help to label this mushroom as anti-cancer vegetable. It contains a relative high amount of omega 3 in comparison with other vegetables. It is a trend in science in discovering that all vegetables of which scientists conclude they have a reducing risk for cancer, contain a relative high amount of omega 3. According to Nobel prize winner Otto Warburg, omega 3 deficiency is the main reason why people have cancer. His view was ignored in the scientific world of the sixties of the 20th century. Since recently, it turned out that many of his findings are compatible with modern science. Chinese researchers conclude in 2008 that this type of medicinal food might aid cancer prevention, especially cancer of the prostate. In 2007 there was a Chinese study published in which the researchers state: ´our studies illustrate the anticancer activity in vitro and in vivo of mushroom extract and its major fatty acid constituents´. This is only one of the many studies that shows a clear relation between fatty acids and cancer preventive properties.

Can mushrooms be eaten raw?

In the eighties of the 20th century there were many surveys done to the habit of eating common mushrooms raw. Some research show a cancer inducing effect from this. There is one component in mushrooms that only shows toxicity when it is isolated. And even when it was toxic, you should eat three kilos of common mushrooms to get influenced by it. Therefore scientists conclude now that eating common mushrooms raw is no danger at all. The ´bad´ component in common mushrooms is called hydrazine. According to German researchers hydrazine is not very dangerous. In a research they state: ´…hydrazine is only weakly carcinogenic even after lifelong ingestion of unequivocally toxic doses. The classification of hydrazine as a “carcinogen” should therefore be re-evaluated…´

Common mushrooms may be eaten raw but don´t eat too much of them uncooked. They do taste much better when they are cut and stir fried shortly. You can cool them down again and use them in a salad. Use stir fried mushrooms to blender a soup with coconut cream, stir fried onions, garlic, black pepper and Celtic sea salt. Add mushrooms to your morning omelet and enjoy your medicine!!