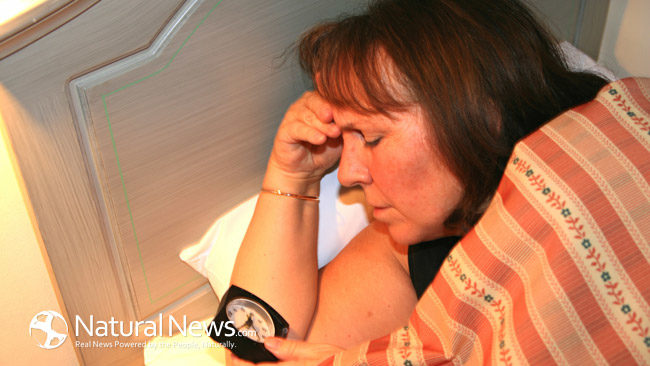 A recent large-scale scientific study from Norway has demonstrated a compelling link between chronic insomnia and increased cardiovascular disease risk.

According to researchers from the Norwegian University of Science and Technology in Trondheim, about 73 percent of heart failure patients experience low-quality sleep, struggle to fall asleep, wake frequently during the night, and arise from sleep not feeling refreshed. The World Health Organization (WHO) estimates that chronic insomnia only occurs in 9 to 15 percent of the general population, meaning that chronic insomnia is significantly more common among patients who eventually succumb to heart failure.

In 2011, the same researchers, led by Lars Laugsand, M.D., Ph.D., in a study of the same population, noted increased heart attack rates in people who suffered from chronic insomnia. The scientists estimated that study participants who struggled to get quality sleep were between 27 and 45 percent more likely to have suffered a heart attack during the research timeframe.

Although the new study does not prove that insomnia causes heart failure, the correlation is significant. Researchers linked patients with three or more chronic insomnia symptoms to a threefold increase in heart failure risk. Laugsand’s team studied over 54,000 men and women between the ages of 20 and 89, following the participants over an 11-year period. None of the participants suffered from heart failure at the time they joined the study.

Insomnia is a significant problem in countries all over the world. In the U.S., an estimated 60 million working Americans have symptoms of insomnia. In the U.K., about half of the population complains of a significant lack of sleep. Even in the developing world, insomnia rates are climbing to the levels experienced by developed countries. According to research from the University of Warwick, a total of about 150 million people in developing countries suffer from sleep-related disorders, or about 16.6 percent of the population. In developed countries, 20 percent of the population battles chronic sleep problems.

Avoiding caffeine, limiting naps, drinking less alcohol, skipping nicotine, sticking to a sleep schedule, and getting plenty of exercise can ease insomnia symptoms. A cup of non-caffeinated tea before bed, such as a cup of antioxidant-packed rose hips tea, can help the body and mind to relax in preparation for sleep.

Although sleep medications can help in the short term, most medical professionals express misgivings about their long-term use. Cognitive-behavioral therapy, relaxation techniques, and stimulus control generally have better long-term success.

In addition to being associated with higher risk of cardiovascular events, chronic insomnia results in significant problems associated with fatigue. Children who experience insomnia have increased incidences of learning disabilities, and adults who have insomnia report serious cognitive and memory problems. Insomnia itself doesn’t cause poor mental performance, but problems result from the sleepiness that comes as a result of chronic insomnia. In a study that measured psychomotor coordination and grammatical reasoning after 24 hours of wakefulness, participant performance was equivalent to the performance of people that were legally intoxicated.

People who suffer from chronic sleepiness also have higher rates of depression and other mental illnesses. In fact, patients with insomnia have four times the incidences of depression as the general population. They also suffer increased rates of anxiety, a greater potential for alcohol and drug abuse, and a pervasive level of irritability.

In addition to mental health struggles, patients who struggle to get a good night’s sleep also experience higher rates of obesity, high blood pressure, diabetes, and other chronic illnesses.

The Impact of Shift Work

More than ever before, business must operate continuously to keep up with demand. This continuous operation has led to an increase in shift work, or working outside normal daytime hours. Shift workers experience a phenomenon called circadian rhythm dysynchronization, or sleep patterns that fail to align with societal norms. As a result of shift work, many workers struggle to sleep when desired, and they end up experiencing chronic sleep loss. In fact, shift workers clock between five and 10 hours less sleep than non-shift workers every week.