Chinese Bird Flu, coming to a McNugget near you 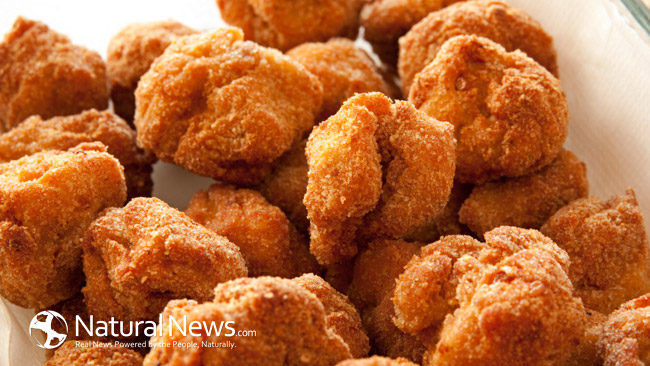 Bloomberg recently published a story that U.S. Department of Agriculture quietly approved several Chinese poultry plants to import chicken into the United States. The intro sentence to their story asks, “Would you willingly eat a chicken nuggets [sic] processed in a country that has no intention of meeting U.S. food-safety standards?”

Wait, the U.S. has food-safety standards? That was a laugh in itself since the harsh reality is that the standards they DO have are already a joke and owned by the Big Ag industry. This move just further diminishes any hope that REAL standards will be introduced and/or upheld any time soon.

What’s even worse is, in typical U.S. Department of Agriculture fashion, you won’t even know whether the chicken products you buy may have come from this source. Of course, the best thing to do is not buy or eat processed meat products of any kind anyway, but for many that’s just not possible in this fast food, make-it-quick society.

Most of us already don’t give much thought to where McDonald’s or KFC source their meat in the first place so this probably won’t be an issue for people who eat at those places regularly. But what about those who pick up a box of frozen patties or nuggets or a TV dinner?

So, why won’t Chinese-processed chicken being imported back to the United States be labeled? Because the chickens will first be slaughtered in the U.S. and shipped to China for processing. Once China has processed them into other chicken products, they can then be shipped back into the States. Conveniently, the USDA does not require point-of-origin labeling on processed foods.

Can you really expect China of all places, with its history of avian flu and other food safety violations, to uphold even the existing weak food-safety standards of the US? Highly unlikely in a country that ships fake honey and toxic children’s toys. But few remember the lead paint scare of 2007.

Sometimes forgiveness is important, but not when the offender continues to commit their offenses. This is what happens when you sell your country to another one for billions of dollars. Wake up America, pay attention and figure out how to take your food rights back.

Sharise Cunningham is an experienced freelance writer and editor based in the EU and holds a B.A. in Journalism from Georgia State University (USA). She is the founder of EcoSteward, a spirit-based initiative for spreading the gospel about all things related to the environment, animal welfare, and organic and sustainable living.