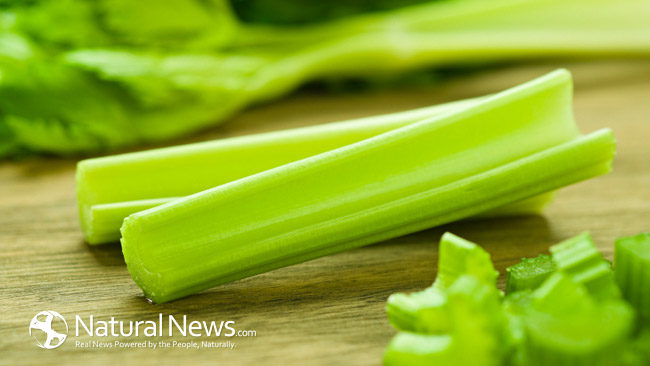 Let’s face it: celery is not much to look at. In fact, in many recipes its kind of an afterthought, adding texture and subtle flavor to the more “spectacular” foods. When it comes to nutritional value, however, this simple vegetable is a powerhouse of vitamins, minerals and other phytonutrients which science confirms can stop breast cancer cells from growing.

First let’s take a look at the basics. Celery, which is related to parsley and fennel, is packed with these essential vitamins and minerals:

-Vitamin K (33% of the total daily recommended amount per serving!)

In addition to all this, celery also has some unique properties which categorize it as a super antioxidant and anti-inflammatory. Research has identified close to a dozen antioxidant phenolic nutrients that can protect against oxidative damage to blood vessels, organs and cells themselves.

According to a recent Fox News study, 74% percent of Americans suffer from some sort of GI discomfort. Celery can be a source of significant relief for the gut too since it’s pectin-based polysaccharides can help calm digestive system inflammation. A 2010 report published in the journal Pharmaceutical Biology found that the flavonoids in celery can protect the lining of the digestive tract from ulcers. Other research has discovered that apiuman, a polysaccharide substance found in celery, helped balance stomach secretions in an animal model.

A 2009 British study also found that celery intake can fight stomach-centered stomach infections such as H. Pylori.  And still other investigations show that celery can improve cardiovascular health, cognition and liver function.

But what about cancer? It turns out that celery contains cancer-targeting substances as well, in the form of two flavonoids– apigenin and luteolin.

A 2016 study conducted by Pusan National University in Busan, Korea and published in the Journal of Cancer Prevention found that apigenin (found in celery as well as in select other vegetables) contains powerful anticarcinogenic properties. Specifically, this flavonoid has the ability to control cancer cell proliferation through “regulation of cellular response to oxidative stress and DNA damage, suppression of inflammation and angiogenesis, retardation of cell proliferation, and induction of autophagy and apoptosis.”

Another study on HER2 Breast Cancer at University of Missouri hypothesized that celery may be a potent non-toxic treatment for breast cancer because it has the ability to decrease vascular growth factor (VEGF). VEGF is an important mechanism for stimulating new blood vessels and tissue in growing children. In adults, however, too much of it can kick start tumor growth. Other studies confirm that celery flavonoids have the ability to lead to breast cancer die off through encouraging “autophagy.”

What these studies and others prove is that consuming celery has the ability to effect cancer cells and the mechanisms which promote them in several ways, and at the molecular level!

How to Get the Most Out of Your Celery

Humans have been gathering, harvesting and eating celery for thousands of years.  According to experiential research conducted by the George Mateljan Foundation (GMF), if you are planning on cooking your celery, steaming is the best way to go. After 10 minutes of steaming, celery maintained about 90% of its antioxidant value. In addition, other studies have found that celery is at its best when it is kept refrigerated, chopped right before consumption and eaten within 7 days of purchase.

Bottom line? You guessed it! Celery—that humble, inexpensive, often-overlooked veg that is probably sitting in your refrigerator right now—is a must-have for a cancer-preventative, Healthy Breast lifestyle. Just make sure it is fresh and organic! Then chop, steam, eat and juice to your hearts content!