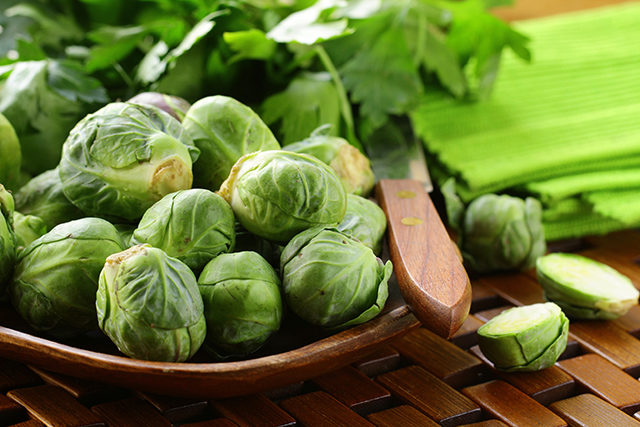 These small cabbages are delicious. But you have to boil it a maximum of 5 minutes. Then its taste gets the rights that it deserves. In Europe, people use to boil Brussels sprouts for over one hour. Then Brussels sprouts start to smell bad and loose virtually all of their nutrient content.

88 grams of Brussels sprouts delivers twice as much vitamin K as the RDA. The same amount contains 125% of the RDA of vitamin C. Brussels sprouts do also contain potassium, iron, phosphorus, molybdenum, magnesium and calcium.

Eat yourself happy with Brussels sprouts

There is an important amino acid in Brussels sprouts. It is called tryptophan. This amino acid triggers the formation of serotonine, the happiness hormone. That is why we need this vegetable badly. This not just a joke. A Dutch university study makes the following statement in 2007  ´…bipolar manic patients have significantly lower tryptophan index than normal controls...´ Treatment with tryptophan is regarded as successful in early stages of research. It is not unwise to anticipate to this kind of research and eat tryptophan rich food to help to treat bipolar disorders.

Brussels sprouts clear the body from cancer inducing components. Glucosinolates are the main responsible substances. Vitamin A, C and E are the best antioxidants. They also contribute to the cancer fighting properties of Brussels sprouts because they reduce chronic oxidation stress. There is omega 3 in sprouts, relatively more than in other vegetables. There is a connection between omega 3 deficiency and setting the conditions to develop cancer. When you want to know more about this relation you may want to read the book The hidden story about cancer´, written by Brian Peskin. Dutch researchers saw in 1995 that glucosinolates might prevent colorectal cancer. More than one study confirms that Brussels sprouts are highly effective to repair DNA-damage. Cancer is promoted by DNA-damage.

Research shows that when this delicious vegetable is treated to long with heat, the active components disappear. That is why you have to boil them shortly, to benefit from them as a medicine. Five minutes is the maximum boiling time. According to a research from 2007 steam cooking is the best way of preparing to ensure the highest nutrient content. They are already perfectly edible after two minutes of boiling. Sprouts are great when you accompany them with just real butter, black pepper and salt. Instead of real butter you can use cream cheese, gorgonzola, mascarpone, roquefort, Dutch cheese, Parmezan, cheddar cheese or other kind of cheeses. Enjoy your medicine!