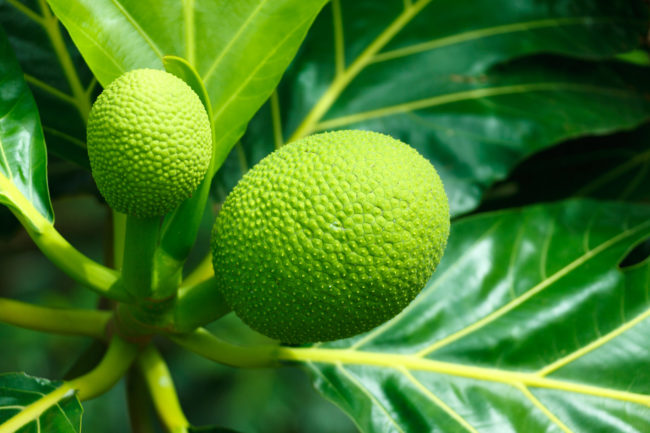 In this article, I will share with you what sciences have come up with regarding the cancer-killing potential of breadfruit.

Like jackfruit, breadfruit is a member of Moraceae family (genus Artocarpus) which comprises nearly 55 species widely distributed throughout tropical and subtropical areas.

Based on DNA fingerprinting studies, breadfruit was originated in the Malay Archipelago which is located between mainland China and Australia.

Today, breadfruit is grown in some 90 countries throughout South and Southeast Asia, the Pacific Ocean, Central, the Caribbean, America, and Africa.

Breadfruit name is derived from the texture of the cooked moderately ripe fruit which is similar to freshly baked bread with a potato-like flavor.

In many South East Asian countries, sliced breadfruit coated with rice flour batter to which a little turmeric and salt are added, are fried (deep frying) until the color turned into golden yellow and eaten as fritters.

From time to time studies have been carried out on this plant biological activities, including anti-inflammatory, antioxidant, antifungal, sexual behavior, immune-modulatory effect, anti-diabetic effect and antibacterial effect.

The followings are brief information on some of the studies performed on breadfruit that particularly focus on their cancer-prevention and cancer-killing actions.

Scientists have identified 130 compounds in various parts of the breadfruit tree, the majority if which are derived from phenylpropanoid.

Breadfruit is rich in prenyl flavonoids and geranyl flavonoids, for instance, one of which is artocarpin isolated from an extract of heartwood of the breadfruit tree.

Antineoplastics are agents that inhibit or prevent the growth and spread of tumors or malignant cells.

Studies have demonstrated that chemical components found in breadfruit leaves exhibit cytotoxic (toxic to cells, cancer-killing) and apoptotic (programmed cell death) effects on human cancer cells by increasing the expression of apoptosis-inducing proteins such as Fas, FasL, and p53 proteins.

Another study performed by Chinese scientists has demonstrated that a geranyl chalcone derivative, isolespeol, induces apoptosis in SW 872 human liposarcoma cells. Liposarcoma is cancer that arises in fat cells in deep soft tissue, such as that inside the thigh.

Leaf extracts of breadfruit, when taken together with other antineoplastic herbs or supplements may theoretically exert a synergistic effect.

A study performed by Vietnamese scientists has shown that methanolic extracts of breadfruit leaves are 100% toxic against PANC-1 human pancreatic cancer cells under nutrient-deprived conditions.

From the same study, the scientists also successfully isolated eight new geranylated dihydrochalcones from the extracts, two of which are sakenin compounds identified as potent cancer-killing candidates.

In a separate study, Indonesian scientists have found that breadfruit hardwood extracts induced apoptosis and sub-G1 phase formation in breast cancer (T47D) cells. The scientists concluded that the extracts have a potential as an anti-cancer agent.

Hepatocellular carcinoma (HCC), also called malignant hepatoma, is the most common type of liver cancer. A study performed by Chinese scientists has shown that two new geranyl flavonoid derivatives, arcommunol A and arcommunol B, together with four known compounds isolated from the breadfruit fruit to have cancer-killing actions against the liver cell cancer.

My two cents: here is my view on how breadfruit can be used as an intervention in people with cancers. In laymen term, the abovementioned study shows that breadfruit leaf extracts may help kill the pancreatic cancer cell under low nutrient conditions.

Besides avoiding cancer-triggering foods, people with cancers are normally advised not to each too much of anything (but not too little either as it can cause malnourishment that leads to cancer overgrowth). Therefore, proper lifestyle, including observing dietary types and patterns, and include herbal intervention as a part of the treatment such as taking liquid extracts (made by boiling in water, decoction) of breadfruit leaves are believed to be able to efficiently help kill cancer cells.

Antioxidants are vital to your health whether during normal health or illnesses.

They help neutralize free radicals which can attack chemical components of your cells, including cell membranes and DNA; enzymes, hormones, and neurotransmitters. Over time, lack of antioxidants can lead to cell and DNA damage (oxidative damage) that may eventually cause cells to mutate.

A study shows that Thai breadfruit (Artocarpus incisus) heartwood extracts exhibit antioxidant activity depending on the dose.  They may have synergistic effects when taken with other antioxidant herbs and supplements.

Another study has shown that breadfruit prenylated flavonoids may act as antioxidants.

Studies that have shown bioflavonoids in general not only act as antioxidants and anticancer, but also act as anti-inflammatory.  Therefore, I deduce that bioflavonoid contents of breadfruits also act in a similar manner.

One study has shown that breadfruit heartwood extracts may have photoprotective effects against UVB-induced oxidative stress and inflammation due to its sunscreen property.

In Indonesia and Pacific islands, breadfruit pulp is used as a liver tonic, against liver cirrhosis and hypertension.

The breadfruit poultice is effective against rheumatic and muscular pain.

The use of the breadfruit leaf liquid extract has been documented to neutralize the toxins due to toxic fish ingestion.

In Indonesia, the breadfruit leaf liquid extract has traditionally been used to regulate blood pressure in hypertensive people.

Other breadfruit traditional uses include removing worm (anthelmintic), thinning the blood (anticoagulant and antiplatelet), and warding off fungi or treating fungal infection.