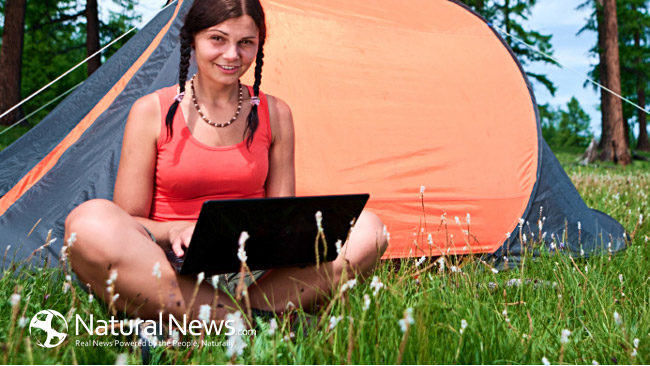 There was a time when you could pick up the telephone and with your finger rotate the dial around the circle to place your call. Someone in an office would plug in cables in the correct switchboard spots to connect you to your party. No answering machines, cell phones, I-phones, Skype or any other calling devices beyond a truckers CB. Those times are long gone… and they really weren’t that long ago.

Today there are practically as many ways to make a phone call as there are choices of salad dressings in a grocery store! The biggest item of change in making a phone call is what occurs after you dial the number. Your phone call, no matter what device you are using to place the call runs through at least 30 some computers before it actually reaches its destination. Over 30 computers!

Millions of American’s voices have been voice printed, like a fingerprint and logged into computer systems via the NSA. The NSA can also utilize computers to track anyone globally by tracing their unique bioelectric signature through EMF wave identification. Anyone can be tracked through any and all electronic communication and interaction. This doesn’t even touch upon implants and how they are used for tracking and manipulation purposes.

The biggest question I get is if everything is recorded and saved in computers, how in the world can the NSA and other agencies digest and utilize the information without getting crushed by its enormous weight? It seems literally impossible for and agency to record every detail on every person they can and have that information not only attainable at the push of a button, but usable in tactical means. Believe me when I say I have wondered the same thing.

The answer lies within something that was constructed back in the 1970’s in three main locations that create a triangle around the globe. The common term is the “Beast Computer”. In Alaska, Australia and South Africa were built three “Beast Computers” that were designed to handle every scrap of information on every person on the planet. Today those three have amplified into a supposed nine spanning the globe and the technology used in the early 70’s to create the original three has long since become obsolete.

Those who doubt the viability of Supercomputers, even though there is a National Center for Supercomputer, can look back to World War 2. The OSS (Office of Strategic Service) of America was working together with the OWI (Office of War Information) in psychological warfare projects. They developed a computer system; a very real and functional computer system that stored over 5 trillion pages of detailed text and could successfully work with and produce any information requested almost instantaneously. That was during W.W. II Just think of how fast technology advances today and place the many years between then and now into context surrounding the details of such computer systems.

Today the Supercomputers log every detail of every phone call, email, computer search (activity), video data from every camera placed in every sector of society as well as satellite images for weather areas in rural and wilderness areas; mail that is opened in many countries, credit card, debit card and bank transactions, medical data, vacations and all manner of other travel patterns; even thought patterns are all downloaded and filed into the current Supercomputers. Those of course are just a few small details that they attain and file away.

If the information is required all the agencies have to do is access the files systems and pull whatever they seek instantly. This is done for every country worldwide. None are exempt.

All information is deemed the property of the governments and in their eyes nothing belongs to the people, not even your thoughts. Nothing is private.

Here at Ways Of The Wild Institute we are dedicated to helping people navigate the vast wilderness within themselves. We utilize the external wilderness, which is the world itself, and internal awareness to assist people in becoming their own true guide for their own lives so they no longer have to seek outside counsel. One such class we offer to present tons of information that helps get people into a very real and vast awareness set is Mind Control & Programming Reality. If we are to understand who and what we are we must first understand what we are not and this means we need to understand the reality and details of global mind control and programming for the manipulation of the masses.