Arame: A Nutritious Seaweed Bursting with Iodine, Calcium and Iron 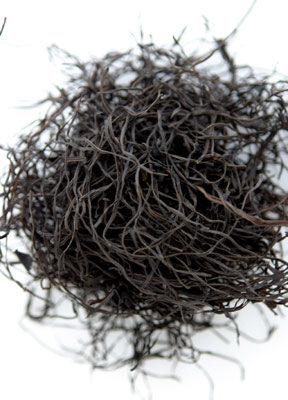 Arame is a brown seaweed that is commonly harvested along the coasts of Japan and South Korea. As with kombu, dulse, and other sea vegetables, arame is used liberally in Japanese cuisine, and it is renowned for its versatility owing to its sweet, mild flavor. Indeed, you’re likely to find arame in many Japanese appetizers, muffins, soups, toasted dishes, and casseroles. Arame is less popular in the West, although more and more health food stores are starting to stock it in dried form due to its considerable health benefits.

Rich in iodine – Sea vegetables are universally high in iodine due to their sea sodium content, and arame is no exception. 50 grams of arame contain more than 100 percent of our recommended daily intake (RDI) of this essential trace mineral. Iodine deficiencies are common in the West and can result in goiter or hyperthyroidism, so it’s important that we don’t neglect iodine-rich foods.

Weight loss properties – Like all sea vegetables, arame is a great weight loss food for three reasons: it is low in calories, contains no fat at all, and is high in dietary fiber. In fact, one 50 gram serving of arame contains between 20 and 40 percent pure fiber. Fiber helps to asborb water from the intestine, invoking a feeling of fullness that prevents overeating. It also helps to relieve the colon of accumulated matter and can help cure constipation.

Good source of calcium – 50 grams of arame contain approximately 50 percent of our RDI of calcium, one of the most important minerals for our bones and teeth. Arame is also high in magnesium, which helps our bodies absorb calcium. For this reason, arame and other seaweeds are even better at healing bones and preventing osteoporosis than dairy foods.

Lignans  – Studies have shown that arame is a good source of lignans, which are phytoestrogens found in plants that serve as antioxidants. Antioxidants help neutralize the damaging effects of free radicals (unstable molecules that can wreak havoc in the body), thereby guarding us from a myriad of degenerative diseases such as cancer.

High in iron – 50 grams of arame contain 25 percent of our RDI of iron, an essential mineral that helps create hemoglobin in red blood cells, which in turn transports oxygen from the lungs to the cells of the body. Like iodine, iron deficiencies are common in today’s society, and cases of anemia are on the rise. Iron-rich foods like arame, however, can completely cure an iron deficiency in no time!

Improves skin – Thanks to arame’s trace minerals, which all work in tandem to aid the body’s natural processes, this seaweed is fantastic at invigorating and nourishing our skin. Indeed, many beauty products (including facial masks) are made from grounded seaweeds like arame. Simply apply the grounded powder (or arame-containing beauty product) onto the desired area, relax, and allow the minerals to absorb into the skin.

Good plant-based protein source – 50 grams of arame contain approximately five grams of protein. This is actually lower than most other seaweeds, especially red seaweeds such as nori and dulse which often contain four or five times as much protein as arame. Nonetheless, five grams is still a high amount, and since arame is sweeter-tasting and more versatile than other seaweeds, it might also be a more desirable plant-based protein source for vegetarians and vegans.