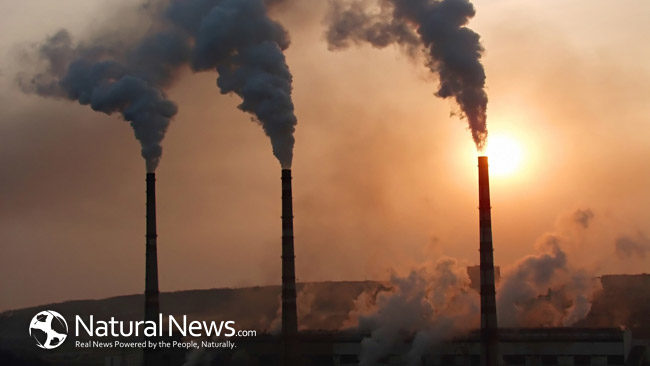 An ancient vedic fire ritual has been rekindled because they say it offers the ultimate protection against pollution. This is the science of bio-energy which denotes the process of eliminating the toxic nature of the atmosphere through the agency of fire. Radioactive substances, microbes and chemical pollution in the atmosphere, soil and water get neutralized by this fire ritual, which has been described in what is considered the most ancient of all scriptures: the Vedas.

This fire is specially prepared in a copper vessel shaped like a pyramid, with cow-dung cakes, and an offering of organic ghee and a pinch of raw organic rice into the fire, simultaneous with the chanting of mantras. This ritual (also called homa) is performed exactly at sunrise and sunset each day, in tune with the biorhythms of the earth. It has been said that the particles of ghee which are released into the air and the sound vibrations from the mantra get attached to one another, creating a protective wall of healing energies, and thereby fortifying the atmosphere. This fortress of protection remains until sunset the following morning, when it is re-created, and again remains until sunset, putting into place a healing wheel.

The transmutational power of agnihotra can be experienced according to the first law of thermodynamics which states that energy cannot be created or destroyed, it can only be redistributed or changed from one form to another. That is, when agnihotra is performed, the smoke gathers particles of harmful radiation in the atmosphere and on a very subtle level, neutralizes their radioactive effect. In other words, the energy gets transmuted, not destroyed.

A number of scientific studies have been conducted in order to authenticate the healing effects of agnihotra. One study examined the effects of agnihotra on bacterial pollution. Two rooms, identical in their dimensions, were used for this study. Both rooms had a fire prepared using cow dung cakes and a copper pyramid. A basal reading of the microorganism count in both rooms was taken just prior to this with blood agar plates exposed in the four corners of both rooms for an euqal number of minutes. This reading was taken half and hour before agnihotra time. Exactly at sunset, agnihotra was done in one of the rooms only. Bacterial counts were taken in both rooms after the ritual in half-hour intervals for up to two hours. It was noted that the room where agnihotra was performed saw a reduction in bacterial count by 91.4 per cent, whereas the room where a mere fire was generated showed no significant change in the count. One explanation for this, according to scientists, is that agnihotra smoke is rich in formaldehyde and other substances which inhibits the development of microorganisms.

Homa farming as it has come to be known is now catching on like wild fire because it promises a turn around from chemical intensive farming and it’s ill effects. Natural resources are getting contaminated and consequently the food we eat is nothing short of toxic. Pollution in the proportions that we are currently experiencing can potentially create distortions in nature. Yet there is hope: ghee particles released from the agnihotra fire attach themselves to the molecular structure of the soil, enabling the soil to keep moisture in. Thus agnihotra-farmed crops are better able to tolerate droughts. It has also been observed that gardens and farms where homa is performed have less pests invading their plants. It has also been found that the cellular structure of the plants change after continued exposure to homa fumes and the yield is of a superior quality in terms of size, texture and taste.

According to vedic literature, “if atoms begin fission and fusion in an improper way an entire civilization could be destroyed.” In light of this, many farms around the world have taken to performing this simple fire ritual in order to inject the atmosphere with the healing and neutralizing energy from the homa. Even farms which face the threat of radioactive substances from nuclear disasters have shown reduced radioactive levels in the produce, a welcome after-effect of homa.

Let’s face it. The earth needs to be fed the healing energies of the homa fire. And its not just the earth that needs it. You and I need it too. For every time you practice agnihotra, your brain cells get rejuvenated, your blood gets purified and your skin is revitalized.

It sends an energetic resonance out into the world that further reinforces that in purely energetic terms, we are all one. And as the sufi poet Hafiz says: “Every time you pray, somewhere in this world something good will happen.”