9 Reasons Why You Should Only Cook With Cast Iron Pans 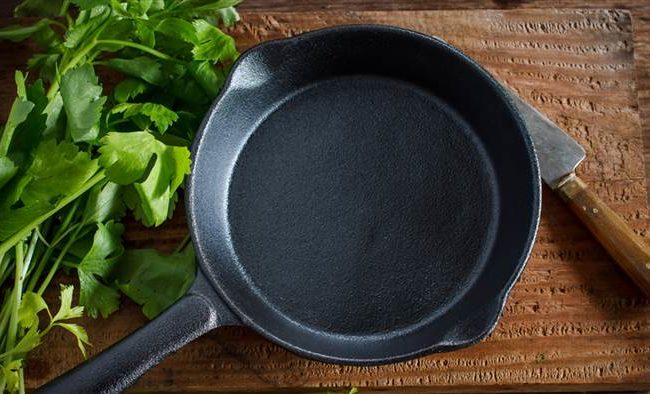 Iron cookware has been with us for thousands of years….since the dawn of the Iron Age. It fell out of favour in the second half of the 20th century with the successful marketing of synthetic coatings for convenience. Cooking in cast iron is known to greatly increase the dietary source of iron. This is especially true when cooking foods high in acid, such as tomato based sauces.

The body needs iron because it is used in the blood. It is what carries oxygen from the lungs via the bloodstream to the rest of the body. It has been estimated that only 65 – 70% of Americans get enough iron.

Cast iron remains some of the most inexpensive cookware on the market. A brand new 10 inch cast iron skillet is a mere $25 . On the other end of the spectrum, a quality heavy-bottomed stainless steel pan that same size will run you over $100.

Cast iron lasts a really long time, often passed down from one generation to the next. Old and worn pieces can be refurbished with a little scrubbing, making this a great eco-friendly option.

Replacing a non-stick skillet with a cast iron one allows you to avoid the toxic fumes that accompany most non-stick cookware. Cast iron can also replace aluminum cookware, which may also pose health hazards.

Cast iron pans are noticeably hefty and their weight is part of their magic, allowing them to hold heat longer than most other pans. This works well, whether you’re searing a steak at a high temp, or simmering a stew on low. If you don’t have the most reliable stove, a cast iron pan can help prevent you from accidentally burning dinner.

Surprisingly, a preheated cast iron skillet rivals the qualities of non-stick cookware, as long as it is properly seasoned and cared for. You can quickly move up this short learning curve by talking with employees at your local cookware store or by reading a book or Internet article about cast iron care.

You can use less oil

A well-seasoned pan is virtually non-stick, which means you can use less oil in your recipes, cutting down on the fat where desired.

One of the most popular benefits of cast iron pans is that they are easy to clean. They don’t require soap and food lifts up off of the pan easily.

You can use cast iron over any heating source, so even in a natural disaster, you’ve got a way to cook your food even over a fire.