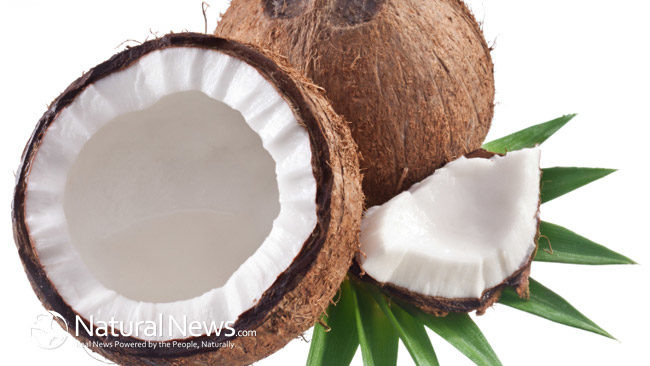 Coconut has often been shunned by many of the health-concious due to its high fat content. However, not all fats are created equal. Researchers are finding more and more evidence to the suggest that the unique combination of fatty acids found in coconut oil can have profound positive impacts on overall health. Read on to learn about 5 reasons why coconut should be included in the diet.

1. Coconut Oil’s “Sat Fats” have many Medicinal Properties
The reason why coconut has been so reviled by those concerned with good health is that nearly all of its fatty acids are saturated fats that people now link with high cholesterol levels and heart disease. However, this myth has been largely debunked and many large-scale studies have been done to disprove the idea that saturated fats clog the arteries and lead to cardiac issues. The fatty acids that coconut is so rich in have been found to go straight to the liver from the digestive tract and there be used as a source of quick energy or turned into compounds called ketone bodies, which can have a therapeutic effect on brain disorders like epilepsy or Alzheimer’s.

2. Coconut-Based Diets among the Healthiest in the World
While coconut is still considered to be something of an exotic food source here in the United States, there are many cultures where coconut is a dietaty staple, the equivalent of wheat or corn in this country. And those cultures have thrived on it for many generations. The best example of this is the Tokelauans, a small population in the South Pacific which consumes a diet that is over 60% coconut-based and thus live on a cuisine which has some of the highest concentrations of saturated fat in the world; even so, they are in excellent health and show no evidence of heart disease.

3. Coconut Oil Increases Energy and Burns Fat
Many people who are struggling to reach an optimum weight will find that coconuts can actually help them on their quest. The medium-chain triglycerides (MCT’s) in coconut oil can increase energy expenditure, sometimes by up to 5%, or the equivalent of 120 calories a day. This extra expenditure can be a powerful aid to weight loss.

4. Coconut has Anti-Microbial Properties
A substance called lauric acids makes up about 50% of the fatty acids found in coconut oil and, when digested, forms a monoglyceride called monolaurin; both of these substances have been shown to kill off harmful pathogens in the body including bacteria, viruses and fungi. This includes dangerous bacteria like Staphylcoccus aureus and Candida albicans, which is responsible for yeast infections.

5. Coconut Oil is a Natural Appetite Suppressant
Another reason coconut can lead to a healthier diet is that it naturally suppresses the appetite and can lead to overall reduced calorie intake. One study showed that when varying degrees of MCT-rich coconut were fed to men, the ones receiving the most ate, on average, 256 fewer calories a day. This is believed to be because of the ketone bodies formed when coconut is digested, which have been shown to curb hunger naturally.

These are all excellent reasons to include more coconut in the diet. Far from being unhealthy, the compounds which coconut is rich in are shown to suppress the appetite, increase energy expenditure, fight off pathogens and contribute to overall good health. It should certainly be part of any health-concious cuisine.