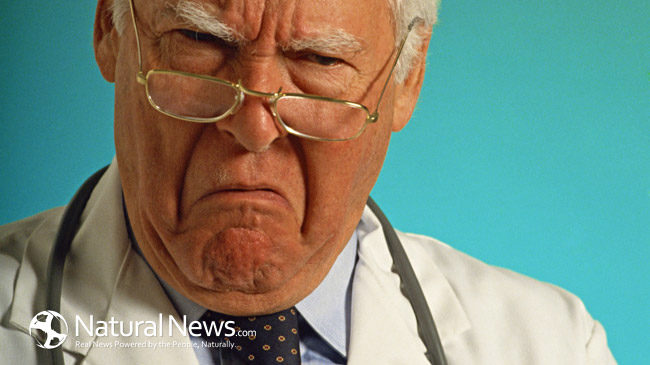 By now, you probably have come to realize that something is not quite right with the current health care system that dominates today. It has become a dictating, disease managing, and complicated mess that has generally left more people sick than healthy. Sure, it’s great for emergency and acute care, but when it comes to eradicating disease, it hasn’t even sniffed the coffee yet.

So when other options exist, such as alternative medicine, that have proven track records for helping people actually uproot the cause of their suffering, why has conventional medicine typically deemed it as quackery?

Turns out, there are 5 main reasons.

The selection process of medicals students is primarily dependent on college grades, which simply means regurgitating what has been taught to them by presumed authorities. If they question this knowledge or authority, their grades typically suffer which will negatively affect their ability to land a job in their profession later.

Due to this system, a medical dogma is created that is incredibly hard to break and the very thought of thinking “outside the box” brings a level of cognitive dissonance and ridicule from peers that makes it nearly impossible for medical students and doctors to consider other options like alternative medicine.

Medical schools tend to be organized into organ-specific departments. The idea that there may be an underlying link to disease originating in different areas of the body is not recognized in this type of framework. The body is treated as parts that are completely independent of each other with little bearing on each others function.

This makes diagnosis much easier when you don’t need to consider other areas that could complicate a diagnosis. It also makes it easier to slap a label on a patient, prescribe a medication, and send them on their way in 7 minutes or less.

So when alternative medicine considers more holistic factors that challenge departmentalization, it is a complete culture shock to departmentalized trained students, who can’t even fathom this “subordinate” system.

With abundant financial rewards in “rescue” medicine (interventions that treat symptoms), and much less monetary value in trying to prevent illness or correct it at the root (thereby losing a “customer”), it becomes very difficult for a medical student weighed down by academic debts to choose the latter.

Considering that the top 11 drug companies globally made almost 85 billion in profit in 2012, the thought of working for any other system seems implausible from an economics standpoint. Early indoctrination, huge debts, and a much more attractive financial reward system, makes alternative medicine an option that is rarely considered.

With medical schools so focussed on learning the intimate details of diagnosing and prescribing due to the profitability of such a system, the major factor for true health gets nearly completely ignored. That component is nutrition.

Doctors study nutrition for a few hours to a few days in what is a long and arduous degree. It is a mere fraction of what they learn, so if they do want such knowledge, they are on their own to get it. However, with such a profitable system in place that relatively ignores it, most do not go out of their way to learn this cornerstone of the alternative field.

However, some doctors are being “forced” to learn more about nutrition, as patients become more knowledgeable with proven information that is being freely shared on sites such as Natural News and Healing the Body.

Too Busy To Gain More Knowledge

Becoming a conventional doctor is a long and intense process of studying, testing, and working around the clock. This intense schedule often does not abate, and could get worse, depending on the doctors success and their location. As a result of increasing demands put on them by an ever growing sick population, continuing their education is often limited and often limited to events put on or sponsored by pharmaceutical companies.

This limits professional growth and keeps the doctor firmly inside the conventional system, not allowing them to expand their knowledge significantly into realms of alternative medicine, such as nutrition. As a result, they continue to learn more of the same and never are allowed to fully appreciate and understand the benefits of alternative and holistic practices.

I am happy to hear that there are some doctors currently in the system who understand the limits of conventional medicine, and as a result are incorporating forms of alternative medicine into their practice, in order to truly serve the needs of the people.

However, your absolute best solution to become well is to put the majority of the power in your hands, since you make 99.99% of your health decisions on a daily basis. All you need is a strong working knowledge and some support, and you can become much more effective on creating your own health care system in your home.

To be a part of that type of system, go here.