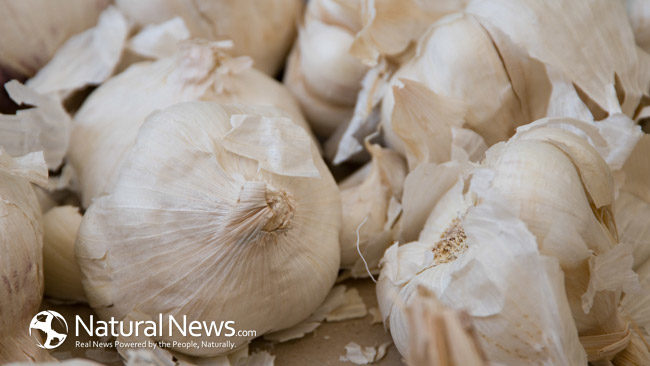 High blood pressure can be caused by many factors, including age, gender, racial or ethnic background and genetic inheritance, as well as lifestyle factors like being overweight, not getting enough exercise, smoking and drinking alcohol. This condition is known as a “silent killer” because very often it will bring no warning signs with it, but can lead to fatal instances of heart attacks and strokes. The risks that high blood pressure carries with it make it very serious indeed. While there are many prescription medications on the market which can help to lower the blood sugar, they can often carry with them undesirable side effects like weakness, dizziness and the risk for developing electrolyte imbalances. Herbs and spices offer a kinder, gentler way to treat this condition and reduce the risk for serious or fatal complications.

1. Garlic
Researchers in the area of cardiac health have long been aware of the positive impact that garlic can have on a heart-healthy diet. As far back as 1993, researchers studying a group of patients with high blood pressure who were taking large doses of a garlic preparation found that this preparation was able to reduce their blood pressure with no significant side effects.

2. Cardamom
This sweet and aromatic Indian spice, perhaps best known in this country for its use in chai tea, was used in a 2009 study of newly-diagnosed primary hypertension patients. These patients were given 3g of cardamom powder daily and it was found that this effectively lowered their blood pressure levels; as with the study involving garlic, no undesirable side effects were reported.

3. Onions
This almost ubiquitous vegetable, used in cuisines throughout the world, contains a compound called quercetin. This is an antioxidant flavonol and it was found to reduce blood pressure in hypertensive patients when studied against the control group, according to 2007 research published in the Journal of Nutrition.

4. Turmeric
This spice is most commonly used in a variety of curries and other Indian dishes. It was found in one study published in the Journal of Renal Nutrition to help lower the blood pressure from patients suffering from relapsing or refractory lupus nephritis, a serious condition of the kidneys. It is also well-known for its anti-inflammatory properties.

5. Cinnamon
One of the most commonly used spices in the American diet, cinnamon has been the subject of a good deal of research for both high blood pressure and diabetes. In one case study involving some 58 patients suffering from both conditions, it was found that 2g of cinnamon daily help to reduce both blood pressure levels and the A1C, a blood test which monitors the overall blood sugar levels for a three-month time period.

Including these herbs in the diet, along with lifestyle changes like weight loss, smoking cessation, a regular exercise schedule and the reduction of alcohol consumption can help to lower the blood pressure. Getting the blood pressure back into a normal range can, in turn, reduce the risk of serious complications in the future and lead to overall better health.