5 Garden Herbs To Reduce Your Risk Of Cancer 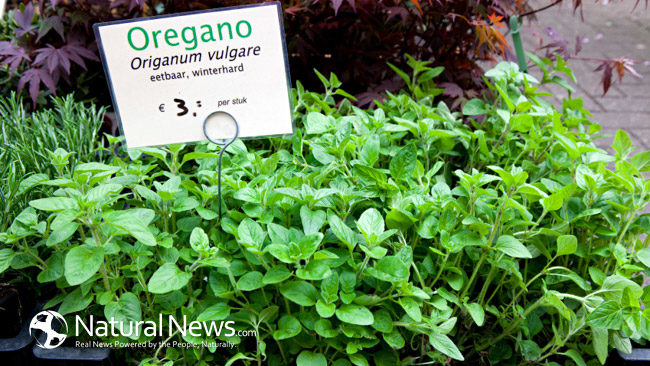 Cancer has been amongst the leading causes of death in humans in recent centuries. This is partially attributable to processed foods and environmental contamination. However, a few cancer preventatives that you’re not aware of may already be growing in your backyard. Here we will discuss five herbs that have scientific studies supporting their potential use in the prevention of cancer.

Famous for its wholesome flavor as a “pizza herb”, oregano has a number of proven health benefits. In fact, oregano essential oil was used for hundreds of years by our ancestors as a way to reduce skin irritation and treat coughing fits. Recent research has shown it to possess antimicrobial properties 1-2 and potentially reduce the risk of kidney stones 3.

The most interesting thing about this herb however is recent research supporting its use as an anti-cancer agent. All this research has centered around a key compound contained in the herb called carvacrol. Carvacrol is believed to be responsible for a number of health benefits including anti-tumor activity. Studies in cell culture models have shown that carvacrol can inhibit the growth of various types of cancer and promote apoptosis (cell death) in various cancerous cell lines 4-5.

As any home-brewer would know, hops is essential to preserving the flavor in beer. The herb, which has edible leaves and shoots, can also be brewed as a flavorsome tea. In a departure from its traditional usage in breweries, recent scientific studies have shown that hops may be used to help fight cancer all thanks to a special molecule it contains called xanthohumol.

Xanthohumol has been shown to inhibit key enzymes that are involved in the propagation of cancerous cells 6-7. But before you go and drink large amounts of beer, you should be aware that only trace amounts of hops is present in alcoholic beverages. Any anti-cancer benefits from beer consumption are negligible, and perhaps even increased due to the other toxins present. A nice natural hops tea is the preferred method to consume this wondrous herb.

Horehound is no stranger to the world of medicine. It has been in usage since the time of the ancient Romans as a remedy for chest infections. More recently it’s been used to treat digestive issues such as diarrhea and constipation, making horehound an essential part of any medicinal garden.

The herb is abundant in flavonoids,  the group of compounds which give plants their color. Flavonoids are a major source of phytonutrients in plants and are often responsible for many health benefits, including reduced risk of cancer. Being a large source of flavonoids, it should be no surprise then that studies have shown horehound to help prevent the progression of various cancer cell lines, including colon and breast cancers 8-9.

Verbena is commonly used in ornamental gardening due to its ability to attract bees and birds as a result of its sweet scent. Also commonly used in various cuisines, verbena makes for a nice meal topping or as a flavorsome addition to any salad. Perhaps more interestingly, verbena has numerous health benefits due to the herb containing a number of iridoids and antioxidants which possess both antimicrobial and anti-tumor properties.

In a promising study, human cancer cells were exposed to chemical extracts of verbena. It was observed by researchers that verbena had an antiproliferative (reduced progression) effect on the cancer cells 10. Whilst the research behind Verbena’s ability to reduce the spread of cancer is limited, it certainly won’t hurt your taste buds to add this sweet herb to your salad mixes!

Ah, meadowsweet. As the name implies, this is a sweet herb belonging to the Rosaceae family and is related to roses and peaches. The usage of meadowsweet dates back to the time of the Bronze age where it has been found by the remains of druids. Whether you realize it or not, you almost certainly are already acquainted with this plant, since it contains the main ingredient found in aspirin: salicylic acid.

More than salicyclic acid alone however, meadowsweet contains numerous compounds which have been studied for their medicinal usage, including heparin, as well as various flavonoids. A recent scientific study in mice showed that consumption of the flowers led to a 67% reduction in the acquisition of cervical cancer 11. Whilst these results have not yet been confirmed in human trials, the research does sound promising.

In conclusion, whilst medicine may focus on ways to treat cancer once it has arisen, a lot can be done to prevent it from occurring in the first place. Eating a healthy diet supplemented by a variety of natural herbs such as the ones mentioned is a good place to start. Adding these herbs to your salads, or extracting their nutrients into delicious, earthy teas, may just be the routine that keeps you healthy well into your advanced years.

Mary Cameroon is an editor for leafmother.com. Leaf Mother is a herbal site offering free information about various herbs and plants.