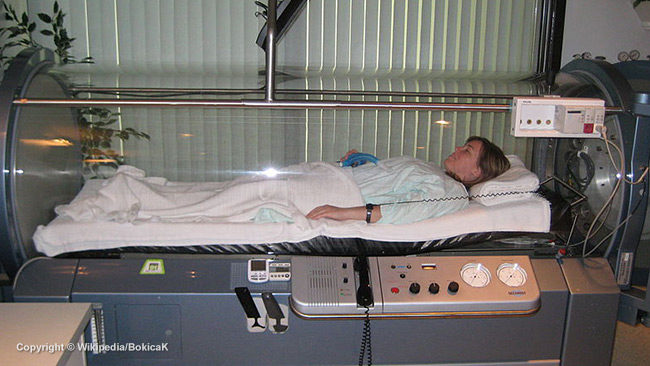 Hyperbaric Oxygen Therapy (HBOT) was earlier associated only with the treatment of “the bends”. However, eventually it was discovered that the therapy has the potential to stimulate healing in other ways also. A Hyperbaric Oxygen Therapy Center now sees more and more Americans going for HBOT to treat different serious conditions, like compromised skin grafts, carbon monoxide poisoning, burns, bone infections, radiation injury, diabetic foot ulcers, chronic wounds and more.

President of American College of Hyperbaric Medicine, Dr. Jeffrey Niezgoda, says that HBOT is an extremely powerful treatment. Its helpfulness and therapeutic benefits are equivalent to that of a surgical scalpel, for the right patient and the right indication. He reported that an increase in the number of wound and hyperbaric oxygen therapy centers can be noted in the United States.

Throughout the nation, about 1,800 – 2,000 hospitals provide HBOT and 500 – 700 non-hospital based institutions provide the therapy, reported John Peters, the executive director of Undersea and Hyperbaric Medicine Association. He adds that almost all the hospital-based programs treat strictly the indications which have been validated scientifically by the FDA and UHMS of the U.S. Non-hospital based programs of HBOT have higher chances of providing “off-label” treatments.

Below appear some benefits of Hyperbaric Oxygen Therapy, which have encouraged hospitals to highlight the treatment:

For long years, most of the people have linked hyperbaric medicine to treating decompression sickness, called “the bends”, which may strike divers surfacing too fast.

At present, HBOT has become a mainstream treatment carried out in a pressurized monoplace (for single person) or multiplace (can accommodate a dozen or more number of people) chambers. In HBOT, patients inhale pure 100% oxygen at an atmospheric pressure about 3 times greater than normal. This substantially increases the oxygen amount in blood stream. Experts state that the blood enriched with oxygen bathes the damaged tissues, triggering the release of various chemicals which promote healing, and also promotes the new blood vessel formation.

Dr. Timothy Manoni, medical director of Stamford Hospital’s Wound Care and Hyperbaric Center in Connecticut, says that HBOT is not a magic bullet. He sates that some patients believe mistakenly that HBOT can cure Alzheimer’s disease, Parkinson’s disease, cancer and other conditions. These uses of HBOT are non-evidence based.

People with chronic damage in soft tissues and bones due to radiation for the treatment of cancer, make a large part of patients looking for help in Hyperbaric Medicine Center at the Beaumont Health System, Michigan, reports Dr. Farris Gulli, the medical director there. The hyperbaric chamber in the therapy center accommodates about a dozen individuals.

Radiation therapy caries out the vital job of killing the cancer cells. However, it also causes damage to the tiny blood vessels feeding the cells, adds Gulli. About 5 to 15% of cancer patients may encounter chronic complications caused by radiation therapy.

For example, survivors of breast cancer may get affected by severe chest wounds. Individuals with neck and head cancers who were given high radiation doses to the jawbone, have the risk of bone damage. People who were given radiation to the pelvic region, may encounter bladder problems.

In such cases, the bladder’s lining gets damaged due to the deficiency of blood flow. The damage may result in blood in urine, which may require blood transfusions, illustrates Gulli. However, with HBOT, new capillaries grow and bleeding stops in a substantial portion of their patients, he adds.

For individuals with diabetes, who suffer from advanced foot ulcers, HBOT can create the difference between having the ability to walk and getting disabled for the remaining life, highlights Dr. Anna Flattau, the medical director of Hyperbaric Medicine Program in the Montefiore Medical Center, New York.

Nerve damage and poor blood circulation pose the risk of foot ulcer development in people with diabetes. Such foot ulcers may become infected seriously, and result in amputation, in the worst case. About 60% of lower limb amputations that are non-traumatic, occur in diabetic adults, as per the Centers for Disease Control and Prevention of the U.S.

Flattau reports that Montefiore aims to prevent diabetes and keep individuals with diabetes healthy. However, if complications like advanced foot ulcers occur, HBOT administered together with other interventions and antibiotics may be warranted.

Flattau adds that HBOT makes a big difference in the patients’ lives. The goal is reducing amputations in patients.

HBOT’s use for treating “off label” conditions, which have not got the approval of the FDA, like Alzheimer’s disease, multiple sclerosis, cerebral palsy, Parkinson’s disease, stroke, autism, traumatic brain injury and more, is controversial. Many experts suggest that patients should only go for the off-label treatments in case they are taking part in research studies.

However, a neurologist in Northstar Hyperbaric, Arizona, Dr. Carol Henricks calls the narrow focus of the FDA as a “terrible shame”. She thinks that the country could significantly diminish suffering and pain if we use HBOT to its real potential. For example, International Hyperbarics Association, Inc. recognizes HBOT’s use for neurological conditions.

The current biggest focus of Henricks is to treat veterans who suffer from brain injury, caused by exposure to explosions. Such veterans are affected by post-traumatic stress disorder and brain injuries, with symptoms like chronic confusion, short-term memory loss, headaches and sleep difficulties.

Henricks states that the first thing that happens after receiving HBOT is that for the first time the veterans sleep through the entire night since getting injured. Then, their headaches leave, and with time they attain clearer thinking.

Henricks started using HBOT before 11 years after she heard from the European doctors about the therapy’s benefits in reducing brain damage in victims of stroke. She administered the therapy for some of the most challenging patients. The results she got were tremendous. After that, there was no looking back.

Although some of the studies show positive outcomes , however, the employment of Hyperbaric Oxygen Therapy in treating traumatic brain injury still remains “investigational,” states Niezgoda.

It seems that HBOT has a lot of potential, with many people heading to a Hyperbaric Oxygen Therapy center to treat several conditions. However, research still goes on and studies are being conducted to understand this therapy more and its effectiveness in treating different medical conditions.