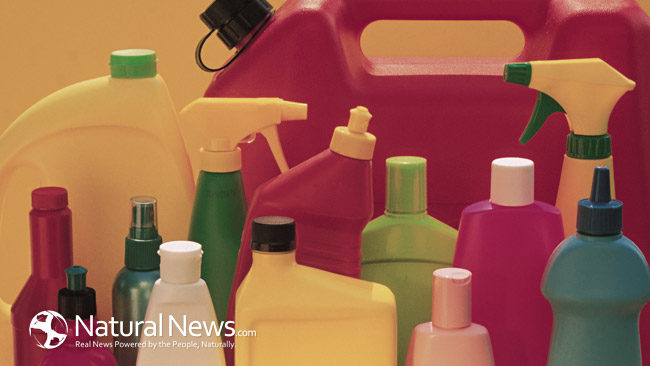 When managing a household, it’s easy to overlook the little things we’ve learned to take for granted. Some of these things though have proven to be so toxic as to weaken the immune system, promote cancer, and even kill small animals. While the amounts you and your family use probably won’t kill you, these hazardous chemicals do cause serious harm over time. It’s important to make sure that even if you don’t make any changes, you’re at least aware of the dangers so you can make the changes you deem appropriate on your own time.
1. Non-Stick Cookware: Non-stick cookware’s convenience masks the hazards of using it. While safe at room temperature, once heated, the chemicals that make it non-stick leech off into gaseous vapors that cause a variety of serious health problems, from headaches on the low end to asthma, allergies, respiratory diseases, depression, immune system suppression, neurological problems and even cancer. In fact, the fumes are so toxic that if you heat a set of non-stick cookware in a small closed room and lock a bird inside, the bird will be dead within an hour. The effect is no different on the human body, except people are bigger and won’t die from that amount, but they will still be harmed from regular, repeated usage.
2. Laundry Detergent: Most laundry detergents are nothing more than a mix of toxic chemicals, with fragrances that fake a scent of naturalness. If you were to eat a tablespoon of it, you would need to go the ER. When you wear clothes washed by these kinds of detergent, you inhale toxic fumes on a continuous basis, and when you perspire, the chemical residues in your clothes or bedding mix with your sweat and get absorbed into your body through the open pores in your skin, similar to the way nicotine skin patches deliver nicotine into the blood. If you have problems sleeping, if you haven’t yet done so, try a natural ingredient detergent—difficulty sleeping has been linked to the all-night inhalation of toxic fumes from laundry detergent in bedding material.
3. Household Cleaners: Conventional household cleaners are similar in their toxicity to conventional laundry detergent. Traditional, chemically-laden glass cleaners, for example, have been linked to the rise in childhood allergies In the last two decades.
4. Fluoridated Toothpaste: Fluoride, and thus fluoridated toothpaste, is toxic. It’s a known carcinogen so toxic as to be the main constituent of rat poison, and it’s dumped into the water supply due to backdoor political lobbying by chemical companies needing to unload this toxic substance, under the guise that it’s good for your teeth. Fluoride, the same fluoride in your tap water, has been linked to metabolic disorders, depression, reproductive disorders, passivity, lower IQ, childhood developmental disorders, weight gain, and cancer, among other problems. Sodium fluoride, in fact, was the primary ingredient in Syria’s chemical weapons, an issue that recently headlined the mainstream news. If it’s considered rat poison, and now a chemical weapon against people, you shouldn’t put it in your mouth. No, you don’t eat toothpaste, but could you spray your teeth with the insecticide Raid and not absorb any of it?