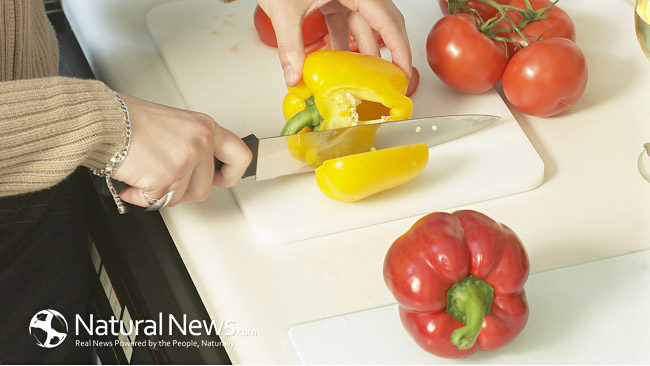 Bell peppers, also known as sweet pepper or capsicum are basically peppers of less pungent varieties which are available in different colors such as yellow, red, green, purple and orange. These plump, bell shaped vegetables were cultivated more than 900 years ago in south and central America and were given the name pepper by the European colonizers of North America. These can easily grow in different types of climate.

Sweet bell peppers are a great combination of tangy taste and crunchy texture. These are scientifically known as Capsicum annuum and belong to the category of nightshade (solanaceae) family of plants comprising of chilli pepper, cayenne pepper, potatoes, tomatoes and eggplant. Green and purple peppers are slightly bitter in taste whereas red, yellow and orange have a sweeter and fruity taste.

The substance ‘capsaicin’ which controls hotness in peppers is present in very small amounts in bell peppers making it less ‘hot’. Though, they are available throughout the year, they are most abundant and tasty in the summers. The content of vitamin C and carotenoid also increases when the pepper is at the peak of its ripeness. These colourful and attractive vegetables are enjoyed all over the world in a variety of cuisines

Red bell peppers help in activating thermogenesis and increase the metabolic rate. Capsaicin which is responsible for increasing the hotness of other peppers is found in bell peppers in very small amounts. Thus, they have a mild thermogenic action that increases the metabolism without increasing the heart rate and blood pressure unlike hot peppers. Hence, they can support weight loss.

Vitamin C is vital for maintaining a healthy immune system and for building strong collagen to support skin and joints. It is instrumental in lowering the risk of arthritis and reducing inflammation. Vitamin K aids in the formation of blood clots. It is important for developing strong bones and protection of cells from oxidative damage.

Bell peppers help in clearing out the congested mucus membranes in the nose and lungs and eliminate toxins through sweating.

By stimulating circulation, bell peppers improve the effectiveness of other herbs. Red bell pepper is a natural hair growth stimulator and is highly effective in curing hair loss. In case of hair loss, capsicum improves blood flow which is vital for proper growth of hair and protection of hair follicles from the effects of dihydro testosterone (DHT).

Red, green and yellow bell peppers are rich in vitamin C which helps in the production of collagen. Collagen keeps the skin firm and protects the cells from further damage. It increases the ability of the skin to fight against oxidative damage.

Capsaicin is found in the white membranes of peppers which is responsible for imparting heat to the seeds as well. It lowers the cholesterol levels and triglycerides. It kills the ulcer causing bacteria in the stomach and boosts immunity.

Source of Vitamin B6 and Magnesium

The combination of vitamin B6 and the mineral magnesium leads to decrease in anxiety levels, particularly due to pre-menstrual symptoms. Being a natural diuretic, vitamin B6 helps to reduce bloating and prevents hypertension.

Green bell pepper has a high content of natural silicon, which may support healthy hair and nails.

One of the reasons why bell peppers plants and the fruits are good for hair is the fact that they are excellent sources of vitamin C which is essential for hair health. Vitamin C helps in proper absorption of iron, thus ensuring that there is enough iron in red blood cells to carry oxygen to hair follicles. Vitamin C is also used in the formation of collagen. Collagen is required by hair follicles, blood vessel and skin to stay healthy and for their optimal growth. Vitamin C deficiency can cause dry, splitting hair that breaks easily.