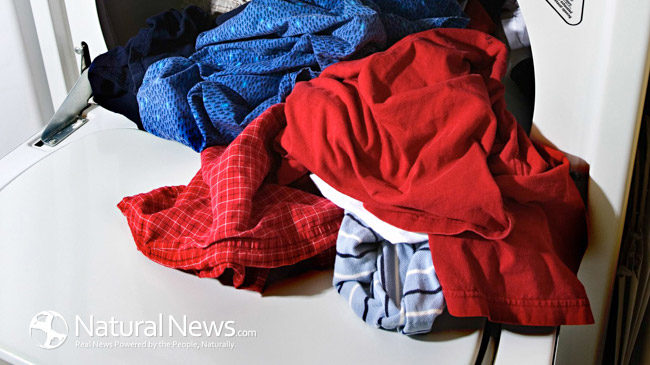 What Americans wear, eat, drink, throw away, use, and are constantly exposed to is nothing short of a massive environmental health atrocity. Find out why with this informative list.

#10 Clothing: From pesticide usage on cotton crops (¼ of all pesticide crop usage, in fact) to millions of pounds of textile industry dyes and CO2 gases going into the air and water, fashion industries and their consumers are contributing to environmental health problems. Plus, the manufacture of polyester and other synthetic fabrics is an energy-intensive process requiring large amounts of crude oil that releases emissions, including volatile organic compounds, particulate matter, and acid gases such as hydrogen chloride, “all of which can cause or aggravate respiratory disease.” There are reportedly over 2,000 chemicals regularly used in textile production, such as formaldehyde, lead, and mercury that are known toxins.

#9 Water Consumption: The U.S. uses about 400 billion gallons of water a day. It takes over 713 gallons of water to make just one cotton t-shirt, and 634 gallons to make just one hamburger! Only 3% of the world’s water is fresh, and 30% of that is groundwater. Groundwater provides about half of all drinking water and nearly all agricultural uses. “The volume of groundwater in storage is decreasing in many areas of the United States in response to pumping,” which causes the drying up of wells, reduction of stream and lake water, deterioration of water quality (particularly through salt water intrusion), increased water and energy costs, and land subsidence—loss of ground support that leads to collapsing soil. Some aquifers contain water that is over 10,000 years old, and underground aquifers that would take thousands of years to replenish with rainwater are being used-up at alarming rates.

#8 Formaldehyde: Formaldehyde is a gas that is widely used by industry to manufacture tons of materials and household products, such as building supplies, particleboard, clothing, furniture, window coverings, glues, adhesives, and paints. Formaldehyde is colorless and pungent-smelling. It can cause watery eyes, burning sensations, nausea, breathing difficulties. The EPA states: “There is evidence that some people can develop a sensitivity to formaldehyde. It has also been shown to cause cancer in animals and may cause cancer in humans. Health effects include eye, nose, and throat irritation; wheezing and coughing; fatigue; skin rash; severe allergic reactions. May cause cancer.” The National Cancer Institute says: “Formaldehyde has been classified as a known human carcinogen (cancer-causing substance) by the International Agency for Research on Cancer.” Formaldehyde can be found lurking in other products too, such as cosmetics, plastics, and cleaning supplies.

#7 Monsodium Glutamate: In 1969, Dr. John W. Olney conducted research on MSG (monosodium glutamate) that was published in SCIENCE journal, stating that MSG causes brain damage and obesity in rats and rhesus monkeys. Many studies have been conducted since that time, making those two things obvious: MSG is addictive and can be used to induce obesity. A 2007  research study conducted by ten scientists and published in Neurotoxicity Research revealed that “MSG treatment of neonatal rodents leads to degeneration of the neurons in the arcuate nucleus.” The arcuate nucleus is a collection of neurons (nerve cells) in the hypothalamus that influence hunger. Not surprisingly, “arcuate neurons are kept informed of whether or not the body has sufficient calories and nutrients so that it can adjust feeding accordingly.” In other words, research shows that MSG degenerates the neurons that tell us how much we should be eating! Yet, in spite of all the studies conducted, NAFDAC supports the use of monosodium glutamate, and there is no limit to the amount of MSG than can be put in food. MSG goes by a multitude of deceptive names, easily hidden even to the most conscientious consumer. The aliases for MSG include, but are certainly not limited to the following: Natural Flavoring, Hydrolized Vegetable Protein, Yeast Extract, Sodium Caseinate, even Natural Seasonings and Spices! Short-term effects of MSG include swelling, headache, lethargy, flushing, sweating, increased heart-beat, and nausea. So, start reading those labels now! Salad dressings, boxed rice and noodle flavor/cheese packets, chips, Coca-Cola and Pepsi products, cookies, candy, pickles, deli products, canned soups, spaghetti sauces, and tons of other foods contain MSG.

#6 Dirty Water: Most people know that numerous chemicals are in tap water, some of which are regulated by the government, some of which are not. Perhaps you buy bottled water or have a water filtration system in your kitchen to remove the chemicals and toxins. What about on your shower head? The human body absorbs chemicals through the dermis, and hot showers increase the absorption rate, as well as create air chemicals. The EPA has conducted intensive studies on the effects of dirty water on the skin. While dirty water is certainly a concern in other countries, U.S. governing bodies purposely contribute to environmental health problems by adding fluoride to water.

#5 Trash: Americans produce 4.4 pounds of trash per day per person! This “trash” or municipal solid waste comes largely from packaging, paper, and lawn clippings. Clothing materials top in at 8.2% of the waste. The 2011 EPA report on municipal solid waste shows that only 1.53 pounds of trash is recycled. While this is a significant improvement from twenty years ago, far too many people don’t take the time to recycle. The Christmas Holidays dramatically increases the amount of waste Americans produce, such as 30 million Christmas trees going into landfills and the equivalent of 45,000 football fields of wrapping paper bought that is difficult to recycle due to the dyes and chemicals. The U.S. has over 3,000 active landfills and and estimated 10,000 old municipal dumps, and all of them cause environmental health problems by leaking contaminants into the ground and water.

#4 Monsanto: The misanthropic history of Monsanto includes production of polyurethanes, aspartame, herbicide glysophates, and Agent Orange production, which makes the thought of the company’s involvement with genetically modified foods—scary. Many scientists, politicians, citizens, and even most of Europe agrees that Monsanto should be stopped, while the U.S. government does things like passing the Monsanto Protection Act, which prohibits individual states from making their own decisions about GM labeling requirements. The Union of Concerned Scientists says Monsanto GM practices not only pose serious and identifiable risks to environmental health, such as allergens and concentrations of toxic metals, but also risks that we “don’t know how to identify” due to the side-effects of “novel gene combinations,” such as new viruses. In addition, recent atrocious environmental health Monsanto lobby petitions include H.R. 935, which proposes to “amend the Federal Insecticide, Fungicide, Rodenticide Act (FIFRA) and the Clean Water Act (CWA) to clarify Congressional intent and eliminate the requirement of a National Pollutant Discharge Elimination System (NPDES) permit for the use of pesticides already approved for use under FIFRA.”

#3 Coal Usage: The U.S. contains the world’s largest estimated recoverable reserves of coal. In 2012, U.S. coal mines produced more than one billion tons of coal. More than 81% of this coal was used by U.S. power plants to make electricity. Coal is mined in 25 states. Of U.S. greenhouse gas emissions, 87% are related to energy consumption. Since 1990, greenhouse gas emissions in the United States have grown by about 1% per year. According to the EPA, “Coal is a fossil fuel formed from the decomposition of organic materials that have been subjected to geologic heat and pressure over millions of years. Coal is considered a nonrenewable resource because it cannot be replenished on a human time frame.” In addition to the environmental health problems of carbon dioxide, sulfur dioxide, nitrogen oxides, mercury compounds, and methane that is emitted when coal is burned, there are currently “grandfather laws” that protect coal-fired power plants from controlling and reducing emissions.

#2 Hazardous Waste: In 2011, out of the fifty largest hazardous waste generators in the U.S., 28.6 million tons of hazardous waste was produced. Some of these generators take the accepted course of action for disposal, but hazardous waste sites are everywhere. According to the EPA, a Superfund site is “an uncontrolled or abandoned place where hazardous waste is located, possibly affecting local ecosystems or people,” and “tens of thousands” of sites have been identified across the country. Many of these Superfund Sites are located in close proximity to residences; sites that contain lead, arsenic, mercury, nuclear by-products, asbestos, and numerous other potentially harmful contaminants, with side-effects ranging from dizziness and fatigue to loss of hearing and even death from inhalation. Most disturbingly, people often have no idea when they are living near—or purchasing a home near—these hazardous waste sites that pose serious environmental health risks.

#1 Wal-Mart & McDonald’s: Take everything on this list and put it on the doorstep of these two conglomerates. Not only does Wal-Mart promote environmentally atrocious consumption and is a massive consumptive entity itself, but the corporation recently plead guilty to federal environmental crimes, such as violating “Criminal and Civil Laws Designed to Protect Water Quality and to Ensure Proper Handling of Hazardous Wastes and Pesticides.” McDonald’s disguises exorbitant amounts of MSG usage in its foods with sneaky labels, and they use numerous “disgusting ingredients” such as ammonia in their beef and beef spray on their french fries. Perhaps the amount of environmental health problems, such as trash, hazardous waste, Monsanto products, formaldehyde, coal, clothing, water and dirty water used, sold, and abused by Wal-Mart & McDonald’s could save us and the planet!

Jennifer Hollie Bowles is a blissed-out Momma and Wife. She offers natural beauty, holistic health, and metaphysical products at Bliss Emporium. Jennifer is also a widely published writer of many genres.