10 Hidden Ingredients in Meat You Didn’t know about 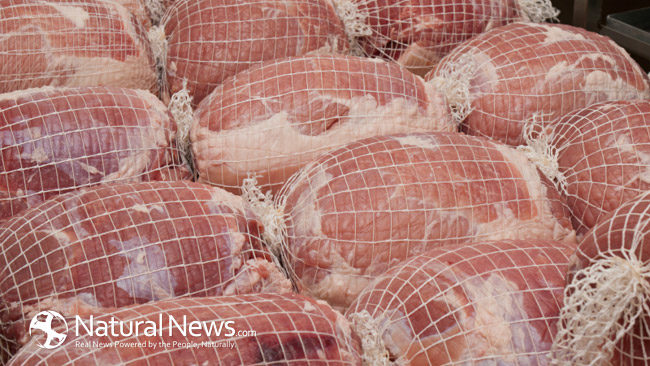 America is still a meat-eating country for the most part and the meat processing industry is a billion-dollar business. The meat produced from these food factories is marketed as highly nutritious and a great way to get protein and other nutrients like iron that people need to stay healthy. What is not marketed, however, is the fact that the industrial processing of this meat can lead to the use of additives that the meat industry would just as soon keep quiet about, like the ten listed below.

Although the FDA once banned these preservatives, they later amended their ban and pronounced these chemicals safe, even though it has been shown that chemical reactions which take place if these preservatives are combined with ascorbic acid (Vitamin C) can produce potential carcinogens.

Ractopamine is a drug used to increase growth in animals and has been found in pork, poultry and beef that has been conventionally raised. Exposure to this chemical can cause tachycardia, or too-rapid heartbeat.

These chemicals are added to meat to prevent bacterial growth and enhance color, but they has also been linked to the development of colorectal cancer.

These medicines are used to prevent infection and encourage growth, but they also lead to human overexposure and also to the development of drug-resistant bacteria.

Although the FDA pronounced these additives safe, they have still been known to induce asthma attacks and anaphylaxis symptoms in those who are sensitive to this preservative.

Everyone has heard of carbon monoxide poisoning, but few people realize they are being exposed to this potentially lethal gas through their meats; carbon monoxide is injected into the meat to extend shelf life and resist spoilage.

The USDA has found traces of many heavy metals like arsenic and copper in beef and poultry, likely originating from commercial feed products which contain these lethal elements in order to control internal parasites.

The chemical LMP 102 is a cocktail of viruses that are only supposed to attack bacteria and is a means of keeping bacteria levels down in the meat industry, and it is feared that there could be a potential for serious allergic reactions to this.

Transglutaminase is also called thrombin or “meat glue” and is an enzyme used for stick together different pieces of meat. While it has been banned by the European Union, however, it is still widespread in the United States.

The way meat is raised and processed here is dirty business, so it should come as no surprise to anyone that much of the conventionally raised meat in the U.S. has been found to have strains of MRSA that are resistant to antibiotics and can be very difficult to treat.

If these additives are not chemicals that you want to put into your body, consider buying locally grown, grass-fed organic meats or simply going vegetarian or vegan; either way, your protein will be coming from cleaner sources than what is available from the meat industry today.

10 Medicinal Plants Worth Your Garden Space