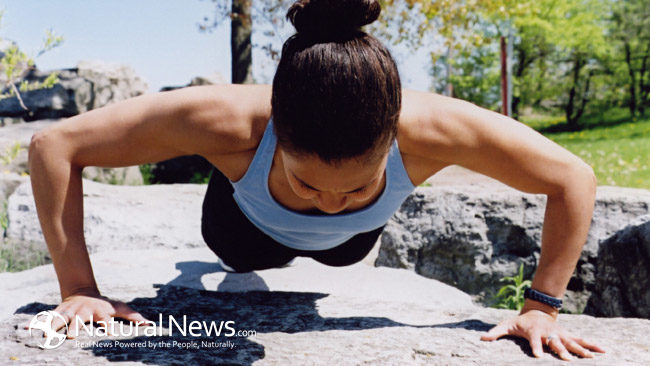 Those who say they don’t have enough time to workout are probably going to need a new excuse. A new study1 finds that a mere 1 minute of all-out exercise performed in a HIIT (high intensity interval training) manner leads to similar improvements in overall health and fitness as a 45 minute moderate cardio session.

HIIT has gained popularity in recent years for its potential benefits and superior results compared to traditional cardio routines. This type of workout involves a draining but quick burst of all-out exercise (such as a sprint), followed by an “active resting” period (such as walking). This sequence of all-out exercise and rest is repeated for 10-20 minutes.

The visual benefits of HIIT can be seen with professional sprinters. Most of their training consists of HIIT where they alternate between sprinting and resting. As a result, their bodies are lean and muscular and much opposed to that of the rail-skinny bodies of endurance athletes.

However, the benefits of HIIT go much further than just helping you build muscle and lose fat. Several studies have shown this method of training to provide several physiological improvements as well. These include improved insulin sensitivity in the muscles2, significant spikes in growth hormone levels3, and more.

How Little HIIT Can You Get Away With?

Luckily for you, the answer may be as little as 1 minute. Scientists at McMaster University decided to conduct one of the most scientifically rigorous comparisons of HIIT and standard cardio workouts.

25 out of shape young men were recruited and their current aerobic fitness (used a marker of their general health) and insulin sensitivity were measured. Participants were split into three groups. One group acted as the control and was asked to change nothing about their current (if any) exercise routines. The second group was assigned a standard endurance-workout. This consisted of riding a stationary bicycle at a moderate pace for 45 minutes. Also, all workouts were performed in a controlled lab.

The final group was assigned to HIIT. This was their workout:

This entire workout lasted just 10 minutes, with only one minute of that time being strenuous. Both groups completed three sessions a week for 12 weeks.

The results? Scientists had found nearly identical gains in aerobic fitness and blood-sugar control (insulin sensitivity) whether the participants had completed the long endurance workouts or HIIT.  Both groups improved their insulin sensitivity and endurance by 20 percent. The training also boosted their energy production and oxygen consumption in their muscles. There were no significant changes in health or fitness in the control group.

Keep in mind that neither approach was superior to the other. One was just much shorter than the other. “If you are someone, like me, who just wants to boost health and fitness and you don’t have 45 minutes or an hour to work out, our data show that you can get big benefits from even a single minute of intense exercise” said Martin Gibala, a Kinesiology professor at McMaster University who oversaw the study.

Hopefully this study does enough convincing for you to start incorporating interval training. Keep in mind that you need to go all-out during the working intervals in order to see the most benefit.

Jeremy is a personal trainer and Kinesiologist from Vancouver, Canada. He is the creator of hiityourbody.com where he provides anything and everything HIIT. From full on HIIT workout programs to quick home workouts, you can find it on his site.

Jeremy is a personal trainer and Kinesiologist from Vancouver, Canada. He is the creator of HIIT Your Body where he provides anything and everything HIIT. From the best fat burning exercises to quick home workouts, you can find it on his site.